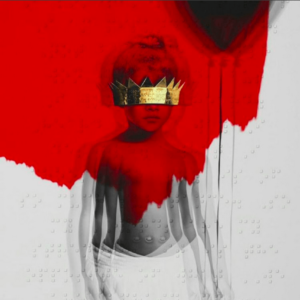 The Limits of Pop Music

Much of what pop stardom is about is image and spectacle.  Substantive content is at best a distant second behind the cultural symbolism of the persona represented by the music, and how the audience desires to attain the same persona or just consume it to bolster a different yet coupled persona.  In fact, this has become an accepted way to analyze and review an album like ANTI.  Under this rubric, the ability of a pop star to succeed is all about crafting and manipulating the persona through music to be something other than just a direct manifestation of whatever hedonistic, saccharine, materialistic nugget forms the core of the relevant pop sub-genre.  But there are only certain ways that doing so is possible within the structural constraints of “pop” music as such, before a line is crossed and the music (good, bad or otherwise) is simply no longer “pop”.  One approach is to deploy much of the trappings of commercial pop, especially using ornate and complex production techniques, but to thread through and embed melancholy and subversive messages that reveal a contrary perspective — a classic example being The Carpenters, but The The‘s Soul Mining fits too as does early Scott Walker.  Another is to engage in ironic, cynical distance.  This is epitomized by the highly constructed “bad girl”/”bad boy” image of the likes of Madonna, P!nk, Justin Bieber, Lady Gaga, etc., which pretends to a kind of rebellion while actually being totally compliant with the demands of a big-business music industry that constructs its own “criticism” so as to be powerless and effectively moot.  There is a degree of sensationalism here, and mostly this approach is self-defeating (or was simply a front all along).  There is also the highbrow intellectual approach, which usually seeks to apply a “respectable” standard from outside of the pop realm to pop music — be it opera, jazz, etc.  Examples abound from Josh Groban to Margo Guryan.  This approach treads a line that often threatens to undermine the notion of being pop music, by subordinating its own standards to an external one and using musical techniques that are less easily identified with “pop” music.  Yet another approach is the “wizard behind the curtain” one, which tries to lift the veil of pop artifice to show the machinations that “really” drive the music.  In this category would be stuff like later Beyoncé.  Lastly, there is a kynicist approach, which take a multivalent reverent/irreverent approach to pop music — artists who reside here are Ariel Pink, The Red Krayola, any of the tropicalists from Brazil, and even early Beck.  Of course, there are other approaches too, but these tend to be some of the most common.

Rihanna’s ANTI cuts across many of these categories.  There is some of the cynical “bad girl” approach, and some of the subversive, contrary messaging.  The former fails in the same way it always does.  That is to say that the music tries to overcome the contradictions of commercial pop music that are at its foundations — like decaffeinated coffee, this is an attempt to have the good without the bad in a way that defeats the premise.  Why even be a commercial “pop” artist at all?  Would a real “bad girl” not be completely outside the corporate media world?  These problems hamper the first part of the album.  There are too many synths and the songs are clunky because they gloss over these issues.  The opener “Consideration” is a throwaway because it dwells in the most mediocre aspects of Rihanna’s past work.  But the latter part of the album shifts towards something that (yes!) is a bit closer to The Carpenters.  This kind of swing between approaches is frankly a bit like Kanye West, who does the Carpenters thing (My Beautiful Dark Twisted Fantasy) and then changes up and does the maniacal version of the “wizard behind the curtain” approach (Yeezus), but he does this kind of thing almost in slow motion.  And for that matter, while the diversion to retro sounds (“Love on the Brain”) has been done a lot (Bruno Mars), it is worth keeping in mind that it was a staple of the Carpenters too (“Please Mister Postman,” etc.).  It allows the music to disconnect from any strict adherence to current fashions and fads. It also suggests there is something — in history — that matters and can be found and taken up again, breaking the tyranny of the present.

The opportunities of pop music are also on display here.  For one, the sense of commonality that underlies pop music grant it the widest possible platform.  Anybody, in theory, can grasp what this music is about.  And there are all sorts of pleasurable musical effect in use.  While “Consideration” tries too hard to use reggae singing, “Work” is much better because Rihanna’s talent for that vocal style is more understated and natural.  “Desperado” is where the album really takes off.  It conveys a sense of hitting bottom but still going on.

ANTI is indeed an album that is better and deeper than it first lets on.  Sure, “Same Ol’ Mistakes” is brilliant, and immediately, unmistakably so.  But across the entire album, this reveals itself slowly to be fundamentally aiming for something more than just Freud‘s “pleasure principle” of a past satisfaction repeated, and instead focuses on what Freud called the “reality principle,” the mature reasonableness of the ego that postpones and defers immediate gratification in search of something more contingent. The simple pleasure accrue along the way, just for what they are and no more.  It would be wrong to say ANTI has colossal ambitions, but it has them and they are what the album is really about.