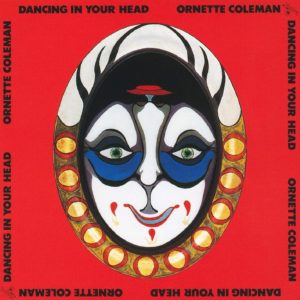 “Creating harmolodic music involves, for Ornette, restructuring the interplay of aspects of organized sound that in jazz and other genres produce a dynamic tension.  Musicians may seize any tone as a harmonic resolution, freed from the tyranny of fixed chord sequences and their closely related substitutions, the requirement of adhering to  a schedule for passing through whatever chords and substitutions are prescribed to accompany given melodies.  Ornette desires lightning rhythmic response to the structural realignments that can be inferred from melodic variation.  This means each and every member of his ensembles is expected to be listening to each and every other member, to be ready to react to what any and everyone is doing melodically and harmonically (the two being horizontal and vertical expressions of the same pitched material) and rhythmically, while hewing one’s own path through a composition.

This is a fairly astute description of Ornette’s music, at least into the early 1970s.  But Max Harrison wrote in A Jazz Retrospect about Ornette’s symphonic piece “Forms and Sounds” that “[w]hatever indeterminate procedures are written into the Sounds and forms [sic] score do not work, and he does not appear to have grasped that the demands and consequences peculiar to this kind of activity do not parallel those implicit in a jazz solo’s indeterminacy . . . .”  This is essentially a criticism that Ornette’s theories are incomplete, and they do not account for or explain the implicit assumptions of the particular musical habits he and his (small) band members had internalized.  This became apparent in the 70s when Ornette’s Prime Time band tended to draw its members from the ranks of a variety of post-rock-and-roll scenes, rather than from the fairly homogeneous bebop backgrounds of his earliest groups.  Harrison goes on to say that the “Forms and Sounds” recording “drifts on steadily, departing from nowhere and arriving nowhere: when there is no change of emphasis there is no scope for expression.”  This is much like saying the “dynamic tension” is missing.  Even if that commentary is perhaps overly harsh (if not completely wrongheaded) with regard to “Forms and Sounds,” it is the sort of criticism that could well be leveled at Dancing in Your Head.

An analogy that might be made here is to the long-standing philosophical debate over so-called positive and negative freedoms.  Under common definitions, negative freedom tends to mean “the absence of obstacles, barriers or constraints” while positive freedom tends to mean “the possibility of acting — or the fact of acting — in such a way as to take control of one’s life and realize one’s fundamental purposes.”  While Ornette often claimed to be opening up possibilities in his music, to free the performers to play as they chose, this sometimes seemed confined to negative freedom, in that Ornette did not externally impose restrictions on others in the band but he also did not urge any fundamental insights.  Did the other musicians use that negative freedom to pursue any fundamental purpose that is of any interest to listeners?  Did Ornette need to pursue positive freedom in order to make his groups’ music interesting, and was that aspect missing from his theoretical explanations of how his music operates?  These are significant questions when looking at the substance of Ornette’s music.

Ornette had made music before based on a freedom principle and an egalitarian attitude toward improvisation.  Though into the 1970s there was more aggression in his music, and he sometimes seemed a bit jaded and humorless. The egalitarian impulses are also subdued, and, at times, also his humility.  Ornette assembled his Prime Time band using many musicians considerably younger than him, and often without any jazz pedigree.  This tended to mean the musicians were extremely deferential to him.  Ornette was kind of like the group’s master, or guru, and everybody else followed him.  John Litweiler, in his useful and informative biography Ornette Coleman: A Harmolodic Life, makes some important observations about these recordings (and those of the follow-up Body Meta):

“Although Ornette’s own phrasing is considerably more symmetrical than in the past, with a great many sequences and repeated licks — he gravitates naturally to three-note phrases that accent strong beats, and to longer phrases that begin and end on downbeats — his improvising is by far the most varied, mobile and melodic of the group.  The net effect of these recordings, then, is of an alto soloist of uncommon stamina accompanied by rhythm players who take their cues from him and whose strong-beat accenting affects his own rhythmic organization.”

Litweiler continues by saying that the other players use Ornette’s lines for inspiration, and the influence of rock on their playing makes them “less rhythmically free than Ornette’s early players, and their roles are in a sense more restricted.”  This is not at all like what Mandel described — every other musician may need to listen, especially to Ornette, but Ornette wasn’t listening and reacting to the others much, aside from a very generalized shift in his rhythmic phrasing.

On Dancing in Your Head, performances by the electric jazz combo Prime Time are paired with one track of Ornette (and the critic Robert Palmer) playing with Morocco’s Master Musicians of Joujouka.  While Ornette saw this meeting of western jazz with the ancient sufi trance music of the Master Musicians as transcending parochial boundaries, and returning to an engagement with dancing audiences largely absent from the cerebral and sedentary audiences for avant garde jazz, there is an unacknowledged flaw in seeing this as transcendent, revolutionary music.  Really the relationship of other musicians deferring to Ornette is simply reversed from that of Prime Time, with him now deferring to the Master Musicians.  More troubling is the way that such deference potentially implies a silly longing for a return to “traditional values.”  The Master Musicians are exclusively male, and membership is hereditary.  They represent, in some ways, a pre-modern, aristocratic/feudal/guild approach to music-making.  So is this musical expression dependent upon hierarchies, like the traditional ones that have oppressed women (etc.) for millennia?  And hadn’t Ornette’s own bands largely lacked female membership (other than a few isolated exceptions)?  And hasn’t Ornette made various homophobic comments in the press through the years?  Doesn’t Ornette’s passion for musical freedom ring a bit hollow from this perspective? (Just as with certain other anarchist figures?)

For the most part, this music simply modulates over and over on the same basic theme, locked into a fairly static rhythm.  This is precisely the opposite of the quasi-serialism embedded in Ornette’s music for so long.  On the one hand, Ornette deserves to be commended for not limiting his music, and expanding the possibilities of what it could encompass.  On the other hand, this also lacks the qualities that made Ornette a name anyone paid attention to.  It seems almost contrarian.

When it came to synthesizing aspects of music from around the world, Ornette was a few steps behind his former musical associates like Don Cherry and Ed Blackwell.  And yet, “Midnight Sunrise” with the Master Musicians is the best thing here.  That is partly because the Master Musicians are always great, independent of what Ornette contributes.  But for his part Ornette manages to perform in a way that is reminiscent of his usual highly personal style yet not completely overwhelming, like his playing often can be.  “Midnight Sunrise” is as deferential a performance as anything in Ornette’s career.  Still, “Midnight Sunrise” makes up only a fraction of the album, while an entire album like it would have perhaps opened up a space for further development of a deeper rapport between Ornette and the Master Musicians, and offered more give and take — maybe even overcoming the leader/follower dynamic.

Dancing in Your Head is another polarizing recording — some even take a masochistic view of it praising how “annoying” it is.  Although this album tends to be one of the most highly regarded Prime Time albums, Of Human Feelings and Opening the Caravan of Dreams deserve to be reconsidered as possibly superior (if still slightly flawed) versions of the bulk of this music.