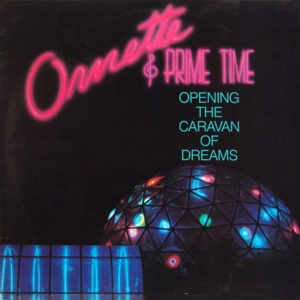 Presented on this album are live recordings of Ornette and his Prime Time band performing for the opening of the Caravan of Dreams club/cultural center in Ornette’s home town of Fort Worth Texas.  This is basically an extension of the same funk/R&B and free jazz fusion that the group had performed and recorded in the past.  Though this particular set of performances has a more raw and visceral tone than the group’s last studio album, Of Human Feelings.  The band gets to wail away with each band member going in his own direction and it kind of makes some intuitive sense that facilitating this is their objective.  Yet they also come together for joint or “unison” statements on songs like “City Living” and “Compute.”  One commentator referred to this as a riff hybrid format, with repeatable riffs organized within a structure that recalled pre-Prime Time efforts.  Ornette’s own performances aren’t perhaps as memorable as elsewhere, though he does deploy a remarkably wide assortment of stylistic flourishes, but the rest of the band sounds tighter than usual.  Occasional use of cowbell, a whistle and some kind of electronic beeper add nice little touches too.  If you like Prime Time’s music, this is sure to please.  If you don’t, this probably won’t change your mind, though to these ears the live setting does make this more engaging than most Prime Time albums.