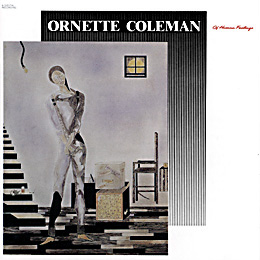 Ornette’s “Harmolodics” approach to music was really more of a political ideology expressed through (generally unarticulated) musical techniques that placed all the performers on a radically equal level.  In this sense, Ornette is kind of an anarchist — not the bomb-throwing type (though his music is “the bomb”) but an adherent to a kind of utopian philosophy that posits a society without hierarchies of power, status, etc.  His music might appeal to the fictional anarchist society on the planet Anarres in Ursula K. Le Guin‘s sci-fi novel The Dispossessed (1974) — which took inspiration from the work of libertarian socialist Murray Bookchin.

Ornette’s seminal album Science Fiction set the tone for much of what he did over the next one to two decades of his career.  “What Reason Could I Give?,” the opening song from Science Fiction, laid out the basic format of trying to regulate the the volume, intensity and tone of each performer on an equal basis that serves the whole more than the individual (egotistical) parts.  This resulted then in a relatively slow progression within the song, as one performer makes a change and in a split second all the others adapt to that change in a corresponding way appropriate for his or her instrument. In the time since Science Fiction, Coleman’s band “Prime Time” adopted more funk-rock influence, in the form of prominent electric bass but also in the style of heavier rock drumming, etc.  The opener “Sleep Talk” is sort of a perfect update on “What Reason Could I Give?”  It takes the same basic approach of treating all the players equally, but, aside from the funk-rock and R&B textures, the players have a much wider latitude to make their “equal” individual contributions.  And the pace is now furious.  If “What Reason Could I Give?” seemed to move slowly to give the performers a chance to react, there is no built-in delay any longer.  The sorts of contributions that are equalized is less constrained to playing unison notes, and it is more like little chunks of sound, and within those chunks each performer gets to do what he wants.  The drummers get to pound away more lyrically, and the bass player gets to deploy more rhythm, like in something approaching slap bass style techniques.  “What Reason Could I Give?” stayed close to the realm of almost “new age” feel-good complacity, but the Prime Time band had space to explore other emotional territories, with frenetic, jiving and even aggressive guitar riffs blended with contemplative noodling and sour, playful notes from Ornette’s saxophone.  A song like “Air Ship” even points to a unique view of masculinity in music, by putting elements of machismo in the mix but refusing to either affirm or condemn them.  They just drift by as one more possibility in a song world with many other possibilities.

If “Sleep Talk” is a high water mark for what Ornette’s Prime Time band could do with Harmolodics, then a problem, perhaps, with the rest of Of Human Feelings is that it never really reaches that high water mark again.  It’s a fine album, for instance the second song “Jump Street” is nearly as good as “Sleep Talk” and there are plenty of other fine songs here, but the intensity seems more aimless as the album progresses (“What Is the Name of That Song?,” “Job Mob”).  That’s a bit unfair.  Still, things get very dense when we have subsets of the group working together within the larger group, and therefore harder to follow.  This reflects a slightly different approach to the group interplay, one that tolerates internal factions, if only on a fleeting basis.  Anyway, what Ornette’s music, in general, and recordings like Of Human Feelings, in particular, put forward is not simply a new set of feelings or statements of perspective, but also a new mode of interaction between musical performers (and by extension, people in general). It is that latter aspect of the man’s music that has made him such a controversial figure.  It made him an innovator and revolutionary.  That tends to either generate enthusiasm or contempt, depending on the listener’s outlook.

Paul Bley, an early associate of Ornette, has said that Ornette’s music

“suggested ABCDEFGHIJK, in which repetition was anathema *** It wasn’t totally free because totally free was A forever, metamorphosing.  It was a form that took hold, because you could finally return to the written music, and the audience had something to hold on to.”

The anarchistic impulses of Ornette’s Prime Time band made this A vs. ABCDEFGHIJK issue a closer question.  Occasionally, Prime Time sound like a band playing just “A”, metamorphosing, rather than progressing to something outside “A”.  This, at least, is the challenge that Harmolodics presents.  The band probably lets ABCDEFGHIJK win most of the time.  But it isn’t always a clear victory.  There is also a sense that the band is expressing itself as a kind of new urban elite, trading in sleek, street-wise riffs.  In short, they almost claim “mission accomplished” when hindsight has shown that there was still a ways to go before the ideas bound up in Ornette’s music had achieved what they sought from society at large (this being a central feature of Le Guin’s book The Dispossessed).  The tone of elitism also sits somewhat uncomfortably with the premise of Harmolodics.  Lastly, it must be said, the notion of treating all instruments and performers as equals (see also “Kontra-Punkte“) sometimes reduces itself to a rather tedious and pedantic exercise in mapping out and assigning values to each contribution — to treat them equally there must be values assigned to each part, enabling the “equation” to be balanced like a mathematical formula.  In that way Ornette’s quest to make music that is “real” ends up taking on the opposite quality, that of superficial appearances driven by the balancing act between the instruments, with a subtle tendency to favor content that fits more easily under Ornette’s Harmolodics regime over content that expresses something deeper.  The humor and playfulness of Coleman’s early music is not always so apparent under those circumstances.  Harmolodics works best when the performance is somewhat less polished, so that in a postmodern way one can hear the imperfect machinations that produce the music.

Given that the textures of late 1970s and early 1980s R&B have fallen somewhat out of favor, and that Of Human Feelings is conceptually challenging, this is definitely not the place to start with Ornette Coleman’s music.  Even just within the output of the Prime Time band, many listeners seem to prefer Dancing In Your Head.  Yet this music is crucial to understanding the impossible dreams Ornette was driving towards in his music.  The early, more well-known stuff formed a path to this, and if this just raised more questions than it provided answers, it may help explain the technical workings of Harmolodics more plainly than other Coleman albums.