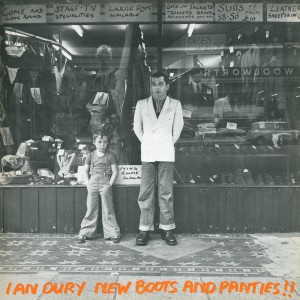 To put Ian Dury in context, I’d say he has a little of the nostalgic and slightly off-kilter, insecure sense of humor of Jonathan Richman (this comes through quite strongly on “Sweet Gene Vincent”), matched with a gritty and edgy lyrical sense and musical vision like Jim Carroll and perhaps less inhibition.  Of course, he’s also fundamentally British.  You might say he was the wittiest and smartest guy in the same type of scene that would produce working class punk and Oi! like Sham 69 and Cock Sparrer, though his band The Blockheads gives this a funky, sometimes jazzy, almost disco sheen vaguely like Marianne Faithfull‘s Broken English of a couple years later but with more visceral drive. Yet the use of such a nondescript style instrumental backing, almost devoid of personality (not to sell The Blockheads short — what they do here is pitch-perfect), places this, along with The The‘s Soul Mining, as a testament to witty lyrics and vocals that are full of character making any music capable of intimacy and charm.  And when they use a prog-rock, jazzy-inflected synthesizer solo on “Blockheads,” it is of course prefaced with a fart sound.  There is a sense of wonder about life in this music.  Yet Dury never takes himself too seriously.  He is always ready to make a fool of himself, and offer a hilariously off-color comment, usually while talking loosely and casually about going out and doing things, having fun, and getting by.  Interesting too that Dury released this, his first album, in his late 30s, somewhat a rarity in rock.  A great one from the punk era.