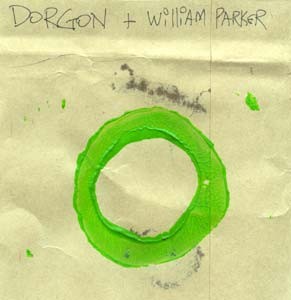 Dorgon (a/k/a Mr. Dorgon, a/k/a DJ$shot, b. Gordon Knauer) is one of those characters few people know what quite to do with.  Allaboutjazz has a series of reviews of his works under the title “Mr. Dorgon: Genius or Charlatan?“.  He found a niche in the late 1990s New York downtown jazz scene, and recorded not one but two sessions with the era’s leading bassist in William Parker.  And Broken/Circle shows how diverse the New York scene was at that time, providing space both for Dorgon’s methodical and almost (subtly) rock-oriented expositions and Parker’s highly refined and adaptable jazz faculties.  Parker is the acknowledged master of the era.  A towering figure, and with as many credentials as could possibly be amassed.  Dorgon has, well, none of the same credentials (though liner notes on various releases on his own Jumbo Recordings label sometimes attribute fictitious ones, just as the back of this album fictitiously states it was recorded in 1949 on board the ocean liner USS Bhutan).  The wooden, plodding noises emanating from Dorgon’s c-melody saxophone have a single-mindedness that forces Parker to adapt and expand the sound all on his own.  Nothing Dorgon does gives Parker a clue, so the bassist is constantly on his toes.  And that really is the point here.  Dorgon throws out sounds like challenges and Parker responds—always admirably.  If in performance technique Dorgon’s playing is rudimentary, he certainly succeeds in creating a context for some of William Parker’s most intriguing playing of the day.

Some of Dorgon’s recordings on his label are well worth investigating, especially those that pair him with talented players like on this album and Dorgon Y Su Grupo.  Many were released with handmade covers.  My copy of Broken/Circle is painted and written on a piece of Kraft paper that seems to be cut from a paper bag.