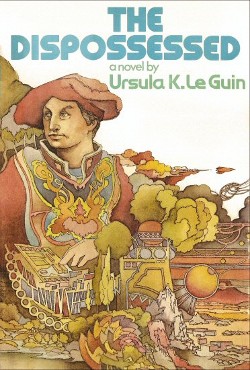 In the tradition of leftist utopian novels, often there is a tendency to make story and plot secondary to gratuitous description and monologues.  The bestselling Looking Backward: 2000-1887 by Edward Bellamy epitomizes that tendency.  Ursula Le Guin manages to make The Dispossessed, about a physicist named Shevek who leaves his isolated moon colony of Annares to pursue his research on the main planet Urras, one of the rare ones that fits sympathetic description of the workings of an anarcho-syndicalist society into a story that has merit on its own.

Le Guin is adept at inserting conspicuous phrasings that distinguish the anarchist society of Annares from contemporary language of Earth (acknowledging the so-called Sapir-Whorf Hypothesis that the structure of a language affects the way speakers conceptualize their world).  Shevek’s daughter says, “you may share in the handkerchief that I use,” instead of “you may borrow my handkerchief.”  Her characters are the sorts that are rarely featured prominently in fiction of any medium: introverted, revolutionary, scientific.  When it comes to character development, she isn’t Tolstoy, but she gets the job done.

As most reviews note, a strength of the book is the critical view Le Guin takes of the anarchist moon colony.  She refuses to make it a place without problems, without fear, without ignorance.  It is a place still burdened by all the failings of humans.  By analogy, the major themes of the book recall Franz Kafka‘s The Trial, from the obscurantist-religious reading, in which Kafka’s protagonist Joseph K. struggles to apply rational logic to a legal system that ultimately is not rational because of its attachment to an irrational power system.  Le Guin does what Joseph K. could not; she replaces all state institutions and laws with a rational system based on a non-hierarchical, stateless society.  But she details how power structures linger, and they are much like those described by Kafka.  The social organization is still subject to individual anxieties, fears, and attempts to consolidate power.  But her main character Shevek engages his own limitations, and challenges himself to overcome them.

Just like tellings of Josef K.‘s story, Shevek goes beyond what his friend Bedap thinks about the unenlightened power structures that have been built up in an anarchist society that had supposedly permanently abolished them all long ago, to realize that there is no guarantee of consistency or meaning in any society, and he breaks the hold of the sustaining myth (the very preconditions of law) of the functioning behind-the-scenes power structures that “really” keep Annares going.  She drives this home by having Shevek’s mother argue — as Bedap’s rhetorical rival — to stop Shevek from communicating with the planet Urras about his physics theories.  Eventually, Shevek breaks the hold that the mother, and the belief that anything external to his mind provides meaning to his existence.

Take the following passage about the presence of police and military hierarchies.  Not only does Le Guin convey an awakening and a rising consciousness in Shevek, but she concretely explains how means are inseparably tied to ends in social structures:

“Atro had once explained to him how this was managed, how the sergeants could give the privates orders, how the lieutenants could give the privates and the segeants orders, how the captains . . . and so on and so on up to the generals, who could give everyone else orders and need take them from none, except the commander in chief.  Shevek had listened with incredulous disgust.  ‘You call that organization?’ he had inquired.  ‘You even call that discipline?  But it is neither.  It is a coercive mechanism of extraordinary efficiency — a kind of seventh-millennium steam engine!  With such a rigid and fragile structure what could be done that was worth doing?’  This had given Atro a chance to argue the worth of warfare as the breeder of courage and manliness and the weeder-out of the unfit, but the very line of his argument had forced him to concede the effectiveness of guerrillas, organized from below, self-disciplined.  ‘But that only works when the people think they’re fighting for something of their own — you know, their homes, or for some notion or other,’ the old man had said.  Shevek had dropped the argument.  He now continued it, in the darkening basement among the stacked crates of unlabeled chemicals.  He explained to Atro that he now understood why the army was organized as it was.  It was indeed quite necessary.  No rational form of organization would serve the purpose.  He simply had not understood that the purpose was to enable men with machine guns to kill unarmed men and women easily and in great quantities when told to do so.  Only he could still not see where courage, or manliness, or fitness entered in.”

So, this is a masterful novel, really as good as anything in science fiction.