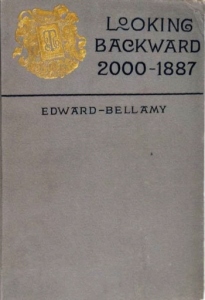 The third bestselling book in the United States in the Nineteenth Century, Looking Backward is a novel about Julian West, a wealthy man living in Nineteenth Century Boston, falling into a trance for more than a century and waking up in a socialist utopian society in the year 2000.  The book is mostly a series of monologues in which the characters describe the new society.  There is a terrible romance subplot tacked on.  Basically, the writing is dreadful, taken on its own.  But this book captured the imagination of America as it industrialized.  The economist Thorstein Veblen cited this book as a key influence, and you might say that most of Veblen’s academic career was focused on establishing genuine economic theories that would move real-life society toward the utopian one outlined in Looking Backward.  Critiques of Bellamy’s vision are that while he presents a compelling economic utopia, he falls short of describing gender equality, for instance.  Still, as a description of a democratic society that fulfills the sort of ideals Jean-Jacques Rousseau outlined during the Enlightenment, this is one of the most positive.  This isn’t written as an attack on anybody, really, but as a description of how things could be so much better.  It aims to convince by showing the benefits of a non-capitalist economic system.  Bellamy also wrote a sequel Equality (1897).