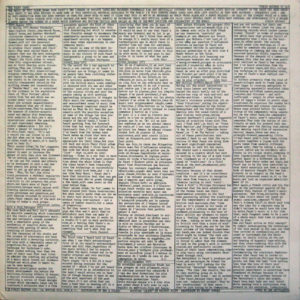 Faust was never a “commercial” sort of band.  But following complaints of low sales they switched to a new label and producer Uwe Nettelbeck struck a deal with a new label, Virgin, where he gave them Faust recordings for nothing and the label released them at a discount price (a full LP for the price of a single) aimed at the British market.  This proved to be boon for the band, with the album becoming their best-selling and most widely known by a substantial margin.  It is stitched together from bits and pieces of recordings into two seamless “suites” of sort.

As fragmentary as the recordings are, and despite the jumps between disparate styles, bits of highly melodic pop appear with some regularity — like a the catchy, rhythmic blasts of fuzz guitar that begin about seven minutes into side one, which provides a mini-song that irreverently confronts a state of mechanical, detached and indifference.  I once told someone that the band Deerhoof‘s album Reveille sounded like The Beatles had replaced Paul McCartney with Yoko Ono.  Regardless of whether that held in that case, it isn’t an entirely bad description of The Faust Tapes.  Certainly, casual pop listeners will be put off.  Yet that is kind of the point.  This is music that pays no deference to commercial, mainstream pop/rock music, even as it accepts that sort of music on the same terms as everything else.  The resultant amalgam of sounds allows the music to shift from the dour to the sprightly and back, and back again, with the impression that the listener is hearing only the best bits.  Or not.  Suffice it to say, there is an impudence at work that is ready and willing to clash with the status quo while at the same time winning over adherents with a likable goofiness and almost absurdist humor.  Definitely an important (however unlikely) statement from one of the bands that fought the good fight. 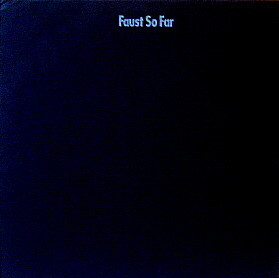 Faust’s second album is quite different from their debut.  The first had only three songs, each long, abstract soundscapes with much processing by engineer Kurt Graupner.  Now there were definite “songs”.  If this makes it sound like So Far is more conventional, that is perhaps misleading.  Every song seems to adopt completely different styles, often multiple different styles.  The opener “It’s a Rainy Day, Sunshine Girl” is driving primitive rock.  The drums are rudimentary and there is a sax solo that is non-virtuoso.  Then the second track is a delicate Euro-classical guitar piece.  The abrupt transition between opposites is what to expect throughout the remainder of the album.

What makes the album so unique is that everything is treated equally.  That is to say that when “On the Way to Abamae” incorporates Euro-classical music, “I’ve Got Mr Car and My TV” is anarchic hippie sarcasm (compare God Bless the Red Krayola and All Who Sail With It), then “Me Lack Space…” delves into free jazz and then “…In the Spirit” features comical vaudeville style jazz, they are all treated as equally valid.  There is no sort of weighting of one over another.  That is pretty radical.  As recounted in his obituary, producer Uwe Nettelbeck took left-wing stances (like writing about the Red Army Faction/Baader-Meinhof Gang) to “force the other side to show its true colors; they won’t react in a liberal way as they would like, but in an authoritarian way as they must when things get serious”.  Faust’s music is kind of confrontational in the same way.  Either you love the open-arms radicalism, or you probably find it grating — probably because it chafes against privileging one things over others that has pretty direct analogs in the “real world” outside of music.  This, certainly, won’t be the sort of music that just drifts by in the background.  So Far is Faust at their best. 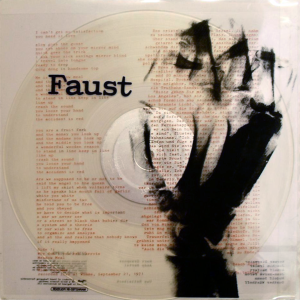 Goethe‘s Faust tells a myth that originated with the life of Simon Magus, a Gnostic who died in Rome while attempting to fly — at least one account indicating he “flew” with an intention to destroy his own body. The German rockers Faust had an approach not so very different from Simon Magus. Faust were more than willing to break from all the commercially viable music of the day.  Screw the usual consequences.  Isolating themselves in a converted schoolhouse in Wümme, the group recorded the album in three days to satisfy their record label. In doing so, Faust moved towards something confounding by conventional standards, but they did so with an offhand charm that is very special.  Mechanized rhythms appear, then melt away.  Melody is faint.  They include snippets of other music (like The Beatles’ “All You Need Is Love” and The Rolling Stones‘ “(I Can’t Get No) Satisfaction”), with the opening segment of “Why Don’t You Eat Carrots” sounding like tuning in a radio to different channels (like Kurzwellen, Hymnen, “Program” from Silver Apples, or “Radio Play” from Unfinished Music No. 2: Life With the Lions) amid waves of static.  The music unfolds at a lethargic pace.  This stands in contrast to the industrial sounds the band makes.  Industrial society is usually about efficiency, and that tends to mean speed and precision.  That is sort of the crux of this (anti-)music:  it has a contrarian way of turning music of an industrial age into almost pastoral collection of vague non sequiturs.  The album self-consciously tries to be different (perhaps The Residents‘ Meet the Residents is a rare attempt to follow-up on this style of music).  Faust’s later work is better, but this debut still stands as a defiant remnant of the tail end of the psychedelic era, when it seemed like the world could be reshaped in new and unexpected ways.  If lots of the hippie stuff of the late 1960s got co-opted, Faust is one album that resists assimilation more than most.  The packaging of this album also bears mention for its uniqueness:  a clear vinyl record in a transparent sleeve showing a x-ray of a clenched fist (the word “faust” means “fist” in German), with a transparent lyric sheet.  It captures well the spirit of the music it contains.