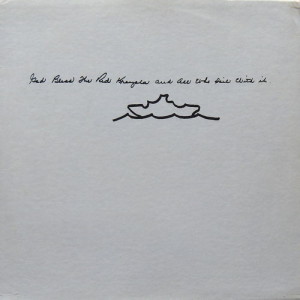 Of all the inventive rock music of the tail end of the 1960s, God Bless the Red Krayola and All Who Sail With It has the distinction of being one that still sounds revolutionary almost 50 years later.  The songs (some can barely be called “songs” as such) mock contemporary rock and pop trends.  Sometimes typical 1960s vocal pop choruses are presented, but a cappella (“Music,” “Sherlock Holmes”).  The drums occasionally react to the other instruments rather than provide a propulsive, syncopated beat (“Say Hello to Jamie Jones”).  Other songs are self-consciously disorganized, with the musicians playing at different tempos, completely out of sync (“Save the House,” “Sheriff Jack,” “The Jewels of the Madonna”).  “Listen to This” consists of the spoken announcement, “Listen to this,” followed by a staccato plunking of a single key on the piano, totaling all of eight seconds.  The shameless insolence of Diogenes does come to mind.  There are some vaguely catchy, if abstract and angular, riffs and melodies here and there (“Dairarymaid’s Lament,” “Leejol,” “Dirth of Tilth,” “Tina’s Gone to Have a Baby”).  They end up being yet another unpredictable facet of the album, confounding expectations that can’t even categorically deny “conventional” rock.  None of the varied, strange devices dominates the album.  While that factor might explain while opinions are mixed, and why this has never really been assimilated into mainstream rock aside from a few punk and post-rock outfits, it also suggests why the movement of the late 1960s counterculture as a whole failed, because stuff like this never caught on.  People tended to cling to the stuff that was more salable, collapsing the movement back into those discrete aspects that fit best within the pre-existing paradigm.  But God Bless the Red Krayola and All Who Sail With It didn’t fit that paradigm.  It still is a remarkably fresh and inventive album.  While the power centers of society may have pushed back against the 1960s counterculture, trying to prove that consumerism and nuclear families are the only viable options, The Red Krayola left behind artifacts like this, a surviving rebuttal that couldn’t quite be absorbed and co-opted.  Texan acts like labelmates The 13th Floor Elevators, but also the likes of Jandek and Ornette Coleman, seemed to have a way of not just taking chances, but trying to casually either make the Earth move or take leave of it entirely.  They reframed the concept of what a safe and secure life meant, placing within a collaborative dialog the possibility of chance, variation, and individuality.  But few were as irreverently funny as The Red Krayola.