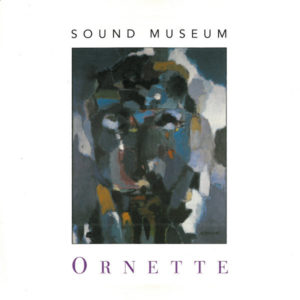 Sound Museum: Hidden Man (a companion album to Sound Museum: Three Women) is appropriately titled.  Like a museum, this is sort of a curated look back at what Ornette had accomplished in his career through the mid-1990s.  And yet it also offers a slightly different perspective on his past accomplishments.  He is recording with a pianist (Geri Allen) in the most substantial way since the late 1950s.  Bassist Charnett Moffett, son of Ornette’s former drummer Charles Moffett, adds understated yet substantial coloring.  But what strikes me most about this music is the way Ornette’s trumpet playing resembles that of Bill Dixon so much.  That aspect was detectable going back to The Empty Foxhole.  Here it is unmistakable — compare Dixon’s Son of Sisyphus (1990), for instance.  There is a lightness to this music, full of space, with a conversational tone to it much like the style Dixon pioneered.  While Hidden Man might not be the most immediately striking album Ornette released over his long career, it is perhaps better than anything he released from the 1990s until his death in 2015.