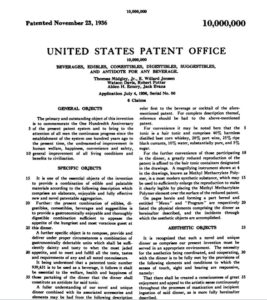 So, obviously, the original U.S. Patent No. 10,000,000 was a joke, issued to serve as the menu for a banquet in honor of the centennial anniversary of the modern patent office.  Presumably, patent office officials at the time thought that they would never reach ten million patents, or otherwise didn’t consider that in the future they would want to make a big deal out of the issuance of a patent with the same number.  So this raises a concern:  whatever unfortunate patentee is assigned a patent numbered “10,000,000” in 2018 (as the USPTO is announcing it plans to do) will probably face a legal challenge regarding the prior issuance of U.S. Pat. No. 10,000,000 in 1936. Suffice it to say, all this is poised to be an embarrassing mess for the USPTO.