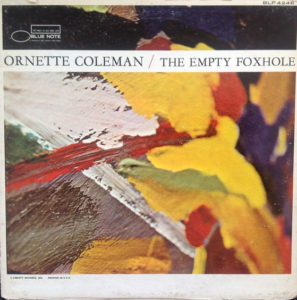 For better or worse, The Empty Foxhole represented Ornette Coleman trying to break from his earlier styles of writing and performing and develop new innovations.  This was a looser, more free-form style that tended toward the chaotic.  Infamously, his untrained ten-year-old son Denardo plays drums.  There are a few hints of the “slice of life” melodicism from the later years of Ornette’s mid-60s Izenzon/Moffett trio.  Yet Ornette branches away from even that, particularly when he plays violin and trumpet.  Ornette recorded this after returning from extended European touring.  In Europe, the foundations for late-60s leftist uprisings were being lain, such as with the publication of Roland Barthes‘ Criticism and Truth, and it seems that Ornette taps into some of that here.  The album title seems to reference the Vietnam War, from a vaguely dissident/pacifist perspective.

To a point at least, I happen to like this album, which tends to be much derided by listeners.  Sure, Denardo’s drumming is inept and is a distraction.  But the overall looseness of these performances is purposefully reigned in somewhat in a way that many other late-60s Coleman recordings are not.  It must be said that while Ornette was one of a very tiny handful of iconoclastic jazz innovators of the 1950s, a decade later many others had taken up the cause and it was now necessary to judge Ornette’s recordings against those of others.  There is a quality to The Empty Foxhole that reminds me of a miniaturized version of Marzette Watts‘ Marzette & Company, or even Don Cherry‘s Eternal Rhythm, though I like the later Watts and Cherry albums much more.  So, while I admire this album, and it certainly marked an important shift in Ornette’s music from a historical perspective, it isn’t one of his essential albums by any means.