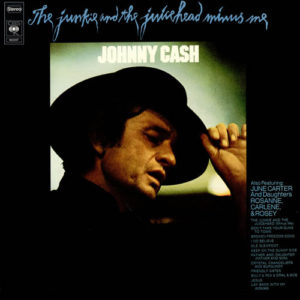 Ragged Old Flag was a transitional album in which Cash finished off with his folk-country phase that began with Hello, I’m Johnny Cash and started to establish a more contemporary sound with the help of producer Charlie Bragg.  The Junkie and the Juicehead Minus Me finds the new style firmly established.  It’s clearly influenced by the big country stars from Texas, like Kris Kristofferson, Willie Nelson and Waylon Jennings (those three would team up with Cash to form The Highwaymen a decade later).   Kristofferson especially looms large, with two of his songs featured including the great title track.  It makes this album a little grittier, looser and modern than typical Cash fare.  A few other songs take on more of a bluegrass flavor.  Funny thing, though, is that there are a number of songs here where vocals are handed over to guests–all part of Cash’s extended family.  On these he sometimes delivers only one line (“Ole Slewfoot”), or nothing noticeable for the entire song.  But that’s actually not such a bad thing.  The album’s biggest weakness is the lackadaisical effort Cash puts into his vocals.  Still, the album tries for a contemporary sound and achieves it without it coming across as forced, and it has aged sufficiently well.  This is another of those 1970s Cash albums that’s fairly decent in an average sort of way, and no classic.  His next few albums represented a step down in quality from this one.