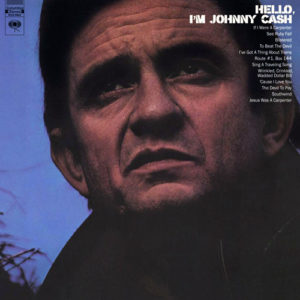 As the 1960s drew to a close, so did Johnny Cash’s era of concept albums, for the most part.  This was both a good and bad thing.  His concept albums were very hit-or-miss, and even at their best tended to include at least a little overwrought material, and at their worst could be downright embarrassing.  Cash could be faulted for trying too hard to force albums into a particular concept.  In the next two decades, the faults of his albums were almost the opposite.  It can feel like Cash gave up on putting effort into recording.  While he focused on touring (and, briefly, his TV show), he ceded control of the sound of his albums to various producers, many of whom did Cash no favors.  The problem was often one of declining sales and ill-advised schemes that grasped at gimmicks.  At other times, the problem was one of self-indulgence with some really disturbingly bad gospel and religious efforts.  Though not everything from the 1970s proved to be a waste.  Highlights from that period tended to be where Cash was in a more basic setting, framed almost like a singer-songwriter, going back to the way he sounded in the early 1960s.  To that was added a good amount of twang.  Hello, I’m Johnny Cash is one of the man’s more listenable albums of the era, one that another reviewer described as setting the tone for Cash’s output the rest of the decade (in truth, this sound only carried Cash through the first half of the decade).  Much of the material is good but not great, but there also is a noticeable lack of any major missteps.  One clear highlight is a duet with June Carter Cash on Tim Hardin‘s “If I Were a Carpenter.”  It’s a song that is perfectly suited to the singers and the one that really reflects the best of the simple but refined production style, with clear yet soft tones and varied yet unobtrusive accompaniment.  This is an enjoyable one for the Cash fan.