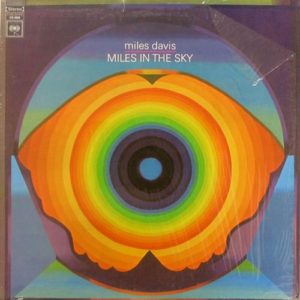 Miles in the Sky gives the impression that it is pandering to psychedelic pop/rock audiences, or that it is just a tentative and transitional effort nestled between more effective recordings of markedly different styles.  But such appearances are deceiving.  Miles Davis and his “second great quintet” were clearly expanding their horizons, and certainly were incorporating more elements of rock (and soul jazz).  Yet the results, however mellow the mood tends to be, are effective.  The album is often categorized as the worst of the Miles Davis Quintet’s late-1960s albums.  And it probably is.  But that says very little, because that band was releasing one classic after another.  This is still a very fine album.  And if nothing else, this might be drummer Tony Williams‘ best performance on record (perhaps rivaled only by his efforts on Sorcerer).  The entire album is a showcase for his relentlessly creative drumming, which never seems to stagnate or rest on repetitive structures yet somehow always seems engaging and connected to the flow of each song.  Keyboardist Herbie Hancock is clearly enthusiastic about the push toward rock music, though saxophonist Wayne Shorter, while his playing is good, seems the most hesitant about shifting away from the style he used in prior years.