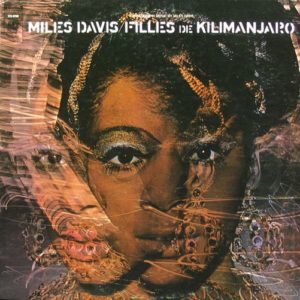 A huge leap forward in the evolution of what became known as jazz “fusion”.  Really one of the finer albums of Miles Davis’ long and storied career.  What made Filles de Kilimanjaro such an advance over Miles in the Sky was the way it subdued and extended the song structures while at the same time elevating the throb of the bass and the kick of the drumming, those seemingly contradictory impulses held together by punchier bursts of horn and keyboard playing that drifted somewhat away from the spotlight and integrated themselves into the songs.  The vamps drive the songs but also leave room for modulation and shifts into improvisational flourishes.  The bass, drums and keyboards trade off each other (see “Tout de suite”) to create tension and forward momentum.  The wind instruments aren’t presented as prominent soloists like in the past, but more as the equals of the rhythm section, which gets to rise to the forefront on a shared basis rather than being relegated to a merely supportive role. This may resemble traditional jazz more than the next few albums, like In a Silent Way and the epochal Bitches Brew, etc, etc.  There is still a clear purpose and distinctive sound achieved that refuses to step back from an increasingly militant — yet hopefully positive — mindset.  Most significantly, this album decisively tipped the balance away from traditional jazz and toward fusion.  This one is just (barely) a half step behind the very best of Davis’ records, which is saying a lot when it comes to arguably the single greatest recording artist of the 20th Century.  This also makes a pretty good entry point to the fusion era.