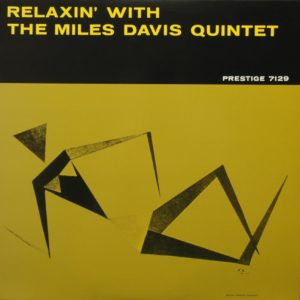 This album is rooted in the hard bop tradition, but with a more laid-back and sophisticated demeanor.  Yet it doesn’t ever truly venture into “cool jazz” territory.  Relaxin’ is basically a perfect title for it.  This is just exceptionally cool (read: hip) music.

The record label Prestige had a somewhat ignoble history and shady reputation.  Its publishing policies were unfavorable to musician songwriters, so most Prestige albums feature all standards.  The label also did not pay for rehearsals, so their albums leaned toward a “live in the studio” approach.  Davis’ 1956 Prestige sessions lack nothing despite the absence of rehearsals.  They featured Davis’ working group and they played these songs with a familiarity and solid improvisational rapport.

This band became known as Miles’ “first great quintet”.  The rhythm section of “Philly” Joe Jones (d), Paul Chambers (b), and Red Garland (p) was the very definition of “solid”.  There is no egocentric showiness.  They just show up and play these songs like motherfuckers.  Notably, Garland had a distinctive style that pared back the chord blocking and focused on more minimal and melodic lines, closer to the wind instruments.

John Coltrane (ts) is here, and of his early recordings as a sideman this is one that more than most points toward what he achieved later in his solo career.  That is to say that he has an unobtrusive confidence and sense of wonder in his playing that is wonderfully effective, even if he plays merely a tangential role here and those qualities are just starting to peek out.

Miles, for his part, plays decisively while retaining a sensitive touch.  His Harmon (wah-wah) mute, played stemless, features prominently.  Davis always had a fiery, stubborn attitude, subdued somewhat by an introverted personality.  He channels all that raging energy into this batch of songs in a way that displays an absolute mastery of conventional devices and an impeccable sensitivity to tone/mood.  Perhaps it was the context of recording songs in a large volume that gave Miles the chance to playing without having to prove anything to anybody — otherwise something that seemed like a major preoccupation of his in his early career.

Basically, if the opener “If I Were a Bell” grabs you, get ready for a whole album with much the same effect.  Frankly, all but the album Steamin’ from these sessions are great albums — and even that lesser one is good enough.  For what it is worth, this reviewer reaches for Relaxin’ far more than any other pre-1960s Davis album.  Maybe you will too.