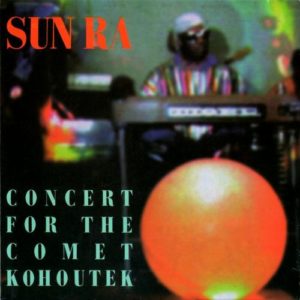 Another rather lo-fi live Arkestra recording from the 1970s.  The percussion and the horns en masse sound particularly muddy, which does the music no favors.  You have to be patient with this one, as it starts rather inauspiciously.  The highlights are some smoking solos from Sun Ra on synthesizer, plus some vocals and sax soloing.  The most intriguing moments come mostly in the middle of the album, on “Journey Through the Outer Darkness,” the perennial favorite “Enlightenment,” and “Unknown Kohoutek.”  The vocals really kick in at the tail end of the album too, being the driving force on “Outer Space E.M (Emergency).”  Some very good stuff here for fans, especially those who go for the noisier elements of Sun Ra’s work, though the unconverted will probably want to look elsewhere as, thankfully, you can find even better Arkestra recordings not unlike this fairly easily these days.