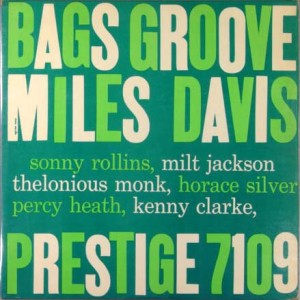 My early reaction to this album was “it’s good not great.”  Well, coming back to it years later my opinion has changed a bit.  While I still look at this and say Miles’ playing is nothing special, due to his general complacency and the fact that he hasn’t yet realized the full potential of his stemless Harmon mute, I have to give credit to the rest of the band for truly achieving something special.  The rhythm section steals the show.  Percy Heath gives amazing performances throughout, and, despite the fact that he never solos, he’s the still the album’s star in my mind.  People have long talked about Monk‘s solo on the title track (take 1), and that’s all well justified.  It smokes.  Unfortunately, he’s only heard on the title track.  But Horace Silver plays well when he’s substituting for Monk, and Sonny Rollins‘ style is well-suited to the music.  Milt Jackson also plays really well in his one appearance.  Kenny Clarke is solid as always, and, significantly, he doesn’t distract from the other performers–something not to be underestimated with a talented group like this.  Bag’s Groove is an excellent album to play in mixed company, even among people who have no specific knowledge of or appreciation for jazz.  It’s about as good as “straight” jazz ever got.