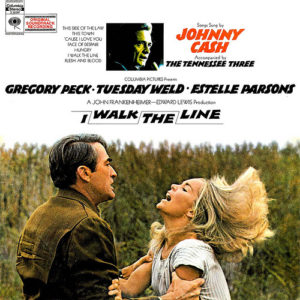 As a somewhat forgotten soundtrack to a somewhat forgotten movie, I Walk the Line (not to be confused with Johnny Cash’s earlier album of the same name) is actually a fairly decent album that fits perfects into Cash’s aesthetic of the early 1970s.  After big success in the late 1960s with a more “rock” sound courtesy of Carl Perkins on guitar, and getting a national television program in mid-1969, he turned back to a more “folk” sound.  This sound was established with Hello, I’m Johnny Cash (1970).  With Cash at the absolute peak of his popularity, choosing him to record the soundtrack to I Walk the Line made sense.  The movie was kind of a bust, as director John Frankenheimer has said that the studio insisted on Gregory Peck for the lead but that Peck was cast against type and not the right choice.

As for the soundtrack itself, it opens with the magnificent “Flesh and Blood,” which would be Cash’s last #1 country hit single — the only time he ever came close to topping the pop singles charts was with “A Boy Named Sue” at #2 in 1969.  The song is grounded in a gentle acoustic guitar part set against a very mellow walking electric guitar rhythm part, with a romantic lyric and sweet, almost saccharine, string accompaniment typical of what was regularly featured on his TV show.   Next there is a new recording of his hit “I Walk the Line.”  It’s a fine version, perhaps unnecessary, but it’s hard to argue with having another performance of one of the man’s best compositions.  The rest of the album is made up of mostly spare acoustic numbers, a few being instrumental versions of songs also presented with vocals.  “Hungry,” “‘Cause I Love You,” “The World’s Gonna Fall on You” and “Face of Despair” are just Cash with an acoustic guitar, reminiscent of the urban folk on Orange Blossom Special (1965) and looking toward the bulk of Man in Black (1971) but also re-establishing the basic format used on Cash’s American Recordings comeback in the early 1990s.  But it concludes with the medley “Standing on the Promise / Amazing Grace” sung by The Carter Family.  The closing song stands in contrast to everything else on the album (much like “Amen” on Orange Blossom Special), but it’s also quite endearing in its homespun, country church stylings.  On balance, this album doesn’t deliver much in the way of songwriting, save for “Flesh and Blood.”  Yet Cash’s performances are steady, assured and impassioned.  If you like any of Cash’s material of the early 1970s, this is one to seek out at some point.