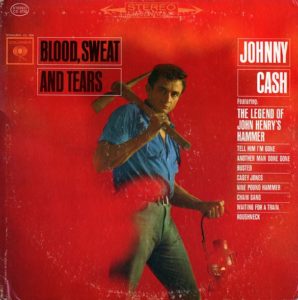 Blood, Sweat & Tears is a prime example of the great possibilities and nagging limitations of Johnny Cash’s string of concept albums of the 1960s.  First off, the album is a bit unwieldy and uneven.  That would be an almost universal characteristic of these concept albums organized around a particular theme.  Many of the songs, the opener “The Legend of John Henry’s Hammer” especially, mix actual singing with what amount to skits.  Cash is often doing theatrical interludes, which are woven throughout the song in a way that prevents skipping over them entirely on subsequent listens.  So as much as his singing sounds great, it always seems like that enjoyment is broken up by a switch to narration and other theatrical radio-drama segments.  It’s not that these transitions are poorly executed as much as the premise behind them gets a bit tedious quickly and doesn’t bear out repeated listening well, especially when it drags on a bit too long as with the more than eight-minute opener.  Yet, on the plus side, the thematic premise of the album makes the whole something greater than just the sum of its parts.  It would be hard to call any songs here classics of the Cash cannon on their own, but they fit together well.  Lastly, it’s pretty apparent that this collection of work songs, railroad songs and folk standards was designed to appeal less to country fans than to listeners interested in the still-burgeoning urban folk movement, whose well-known names included Pete Seeger, Harry Belafonte, Odetta, and others.  It makes the enterprise seem a bit forced at times.  So, honestly, Cash has done better concept albums, though this one is still decent.