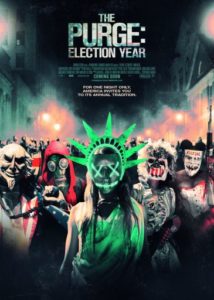 The Purge series falls into the tradition of relatively low-budget horror films with dodgy technique that use the “lowbrow” appeal of the film as an opportunity to critique the upper classes.  The first film in the series is rather poor, caught up in empty suspense for its own sake (and presumably, due to budget constraints too).  But the second film, The Purge: Anarchy, is actually quite good — even going so far as to feature a Black Panther-like group presented sympathetically.  The third film, Election Year, is pretty raw and blunt with its message.  There is no nuance.  And yet, the bad guys are bad guys and the good guys are worth rooting for.  The good guys are never saintly.  They all face moral challenges, and most are presented as having overcome mistakes of their past.  The bad guys are truly monstrous, employing self-serving religious dogmatism and the fascist concept of redemptive violence to further a thinly-veiled class war against the poor — notably along racist lines.  The script seems flawed, in that the characters are slow to pick up on plot points that are quickly apparent to the audience.  There is also a group of annoying teenager characters who all seem entirely superfluous to the main plotline.  So, while falling short of the previous film, this one is still better than the first Purge film.  It may be simplistic, but, unlike most commercial films, it actually has a moral center that isn’t stupid.