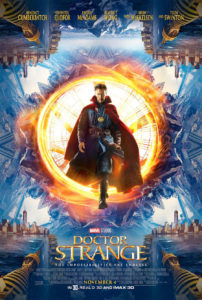 Another superhero film. Much of the plot is an ersatz version of anarchist writer Ursula K. Le Guin‘s fantasy classic A Wizard of Earthsea (1968). But there is plenty of good humor here. Tilda Swinton proves yet again that she is one of the best actors in mainstream cinema. While her character, and others, at first seem to be yet another example of the dubious practice of casting white people in “Asian” roles, the film actually addresses that concern in a satisfactory way. In the end, this film is quite average, maybe *slightly* above-average in a relative sense.  There are certainly worse big-budget superhero movies out there.