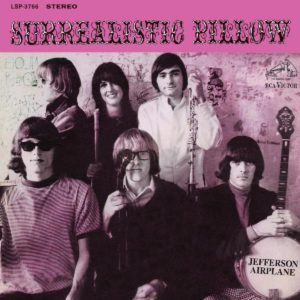 I just don’t know what to make of Jefferson Airplane.  Can’t say I ever listened to them much other than the ubiquitous singles that crop up in nearly every retro “Sixties” movie that uses “White Rabbit” or “Somebody to Love” for trippy atmosphere or “Volunteers” for rebellious protest attitude.  So, giving a few of their albums available from my local library a try, they now strike me as a band a little short on songwriting skills, at least in relation to their guitar prowess, and forcing themselves to do too many ballads and slower tunes that they didn’t pull off well.  They were at their best doing scorching psychedelic jams, with lots of space for guitarist Jorma Kaukonen to stretch out.  So, there’s good stuff here.  “Somebody to Love” is iconic, and it does highlight the darker side of free love and what was to come in the Summer of Love.  But lots of this feels like filler.   And singer Grace Slick is rather annoying, really.  She’s very didactic.  I found Live at the Fillmore Auditorium 10/15/66 (Late Show – Signe’s Farewell) from the pre-Slick era to be equally or more satisfying, and After Bathing at Baxter’s is certainly the band’s best.  Basically, this album was rendered obsolete a few months later when The 13th Floor Elevators released Easter Everywhere.  Otherwise, if you must have Sand Fran psych, just go straight for early Grateful Dead.  But I couldn’t shake the feeling listening to Surrealistic Pillow that I would rather be listening to Easter Everywhere.