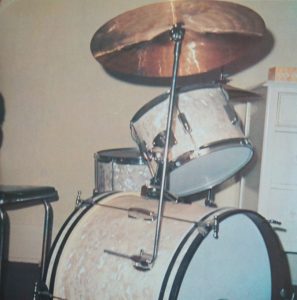 Jandek is an interesting proposition.  Interstellar Discussion makes for a good barometer to gauge why it is anyone listens to Jandek albums.  Side one very much sounds like a bunch of young people with minimal musical instrument proficiency banging away in a rehearsal space with a tape recorder running.  The harmonica parts seem almost overdubbed.  While the performances are, by most standards, inept, the guitar does display hints of a very deliberate and unusual sensibility.  Side two is acoustic stuff, like other early Jandek releases but seemingly trying more than usual to be melodic — and possibly failing at that effort.  So, there is something in here, weird outsider art potential, but this does sound like rehearsals on tape.  Actually, this listener subscribes to the theory that this recording is archival in nature and predates earlier Jandek/Units releases.  Some listeners may out of fascination just find a way to like this in spite of its objective qualities.  But, really, this is not as intriguing as other Jandek albums, in spite of its potential.  Given a more careful listen, it’s noticeably less proficient than other efforts.  If this is your favorite Jandek, you’re probably more interested in the myth and mystery than the actual music, or just see it as an affirmation of “be yourself” new ageism.