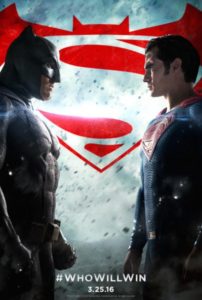 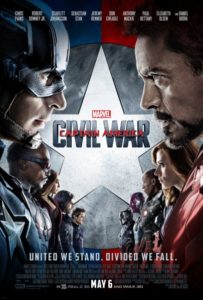 So, Batman v Superman: Dawn of Justice (part of the DC Comics universe) turns out to be better than it seems like it would be, which maybe doesn’t say a whole lot. I very nearly stopped watching after a few minutes. It gets better though. Like a number of other big-budget superhero movies of the day, this film is long. Yet it also crams in so many characters (and a few useless Lois Lane and Jonathan Kent scenes) that it still feels a bit rushed. The basic premise is vaguely in line with Alan Moore‘s famous Watchmen comic, asking Juvenal‘s immortal question (from Book II, Satire VI: The Decay of Feminine Virtue): who guards the guards themselves [Quis custodiet ipsos custodes]? The film is at its best when it convincingly puts forward that question. But then it hints at a sequel (deferring complete resolution) and, at most, answers the question in an unsatisfying way. Anyway, Ben Affleck is for the most part completely unlikeable as Batman/Bruce Wayne. That makes him the perfect choice for the role. He brings out the arrogant right-wing vigilante qualities of the character’s recent incarnations well. Henry Cavill is also good as Superman/Clark Kent. His character’s dim-witted engagement with Batman is surprisingly convincing.  Jaime Eisenberg is well-cast as the unlikeable Ayn Rand-worshiping villain Lex Luthor. This film was directed by Zack Snyder (slated to make a new version of Ayn Rand’s The Fountainhead) and produced by Steve Mnuchin, now Secretary of the Treasury (!) in the Trump administration.

The essence of this Batman/Superman film’s morality is that it accepts Thomas Hobbes and perhaps also Machiavelli as providing the philosophical foundations for the ideal society.  All the usual critiques of those thinkers could be applied to the film.  Machiavelli, of course, is known for his argument in The Prince that in politics the ends justify the means.  Hobbes was a “social contract” theorist, famous for writing in Leviathan that life was “solitary, poor, nasty, brutish and short”.  G.D.H. Cole described Hobbes’ theories this way:

“Hobbes . . . regarded the people as agreeing, not simply to form a State, but in one and the same act to invest a certain person or certain persons with the government of it.  He agreed that the people was the final source of all authority, but regarded the people as alienating its Sovereignty by the contract itself and as delegating its powers, wholly and for ever, to the government which its members agreed to set up.  As soon, therefore, as the State is established, the government becomes for Hobbes the Sovereign; there is no further question of popular Sovereignty but only of passive obedience: the people is bound, by the contract, to obey its ruler, no matter whether he governs well or ill.  It has alienated its rights to the Sovereign, who is, therefore, absolute master.”

Hobbes argued that such a State must be formed in order to avoid a situation of civil war and bellum omnium contra omnes (“the war of all against all”).  The film flirts with these concepts, by asking whether Superman, or Batman, or some larger group of superheroes, should be invested with the authority to fight monsters and villains on behalf of society.  Batman is kind of like Hobbes, a defender of “liberal” aristocracy/monarchy against the divine right of kings-type theories.  Machiavelli lurks behind the story in that the superheroes (technocractically) decide amongst themselves what is best for the people.  What is sad about this Hobbesist argument is that it was a political argument made hundreds of years ago!  In other words, the political background for the film’s plot is reactionary by framing the “relevant” political question as being exactly the same as what was debated hundreds of years ago.  Critics of Hobbes (like Rousseau) who argued that democracy should prevail over aristocracy do not even enter the frame of the debate.  Put another way, the film places “relevant” contemporary American political debate in the pre-Revolutionary War era!

Captain America: Civil War (part of the Marvel Comics universe) is also overly long and filled with too many characters.  It does, curiously enough, probably set some kind of record for the action film with the most debates in conference rooms (I kid you not!).  Much like Batman v. Superman, the movie preoccupies itself with the concept of who guards the guards themselves, or, put more bluntly, who governs the superheros (in this case, many are ordinary mortals with access to special military weapons).  While there is a wide array of superheroes here, allocated proportionately along race and gender lines, the main rivalry is between Captain America/Steve Rogers (Evans) and Iron Man/Tony Stark (Downey, Jr.).  Stark wants to submit to a United Nations accord that will govern the superheroes’ “Avengers” group.  Captain America refuses.  The characters’ motivations are mostly absurd and implausible.  Iron Man/Stark in particular just comes across as stupid and arrogant.  The character The Black Panther (Chadwick Boseman) is obnoxious, a character designed merely to pander, and a wasted opportunity (to link the character to the real-life Black Panther Party for Self-Defense perhaps?).  Spider Man (Tom Holland) appears, as does Ant-Man (Paul Rudd), and they leaven the proceedings in a good way.  There are many fight scenes, some of them a bit formulaic, and the film struggles to plausibly present these when some of the characters have superpowers of a substantially greater magnitude than others. But some are engaging.

All those details aside, there is an important difference from the Batman v Superman film.  Captain America: Civil War is kind of post-political.  On the surface, it appears that the film is “left” of Batman v Superman because it explicitly depicts a role for the United Nations (UN) as a “democratic” body that overcomes the superhero “civil war” that is a “war of all against all” of sorts.  When the UN creates an accord (somehow in secret; that is, without the knowledge of the superheros), the film glosses over the imperialist corruption of the UN, merely referring to the nearly 200 countries that signed on — creating the false impression that all countries are equal in the organization.  The character of the really-existing UN aside, the details of the accord are never actually discussed.  When the Avengers debate it, the political character of the accord is subsumed in the silly, irrelevant interpersonal conflicts, mostly between Captain America and Iron Man.  While the UN accord is supposedly driven by a desire to curb the collateral damage to civilians caused by the Avengers (just as Batman/Bruce Wayne complains about with respect to Superman), who actually governs the Avengers under it (and how they do so) is never really mentioned.  An official simply throws a large stack of paper on a table — the content of the accord is simply some legalistic/technocratic thing that neither the Avengers nor the audience is supposed to be concerned about.  This leads to another important point.  There is curiously no depiction of ordinary civilians as anything more than background props in a few action scenes.  A largely faceless government of technocrats simply decides for the people what is best for them.  Comparisons to the European Union “Troika” institutions (which push “austerity” measures that favor bankers/finance over ordinary workers) might be apropos here.  So, while there are ample opportunities to critique the aristocratic-leaning political philosophy of Batman v Superman, Captain America: Civil War instead leaves no room for political debate.  To adopt Colin Crouch‘s term, the film depicts a “post-democratic” world (“A post-democratic society is one that continues to have and to use all the institutions of democracy, but in which they increasingly become a formal shell”).  From another angle, it is also worth noting that the prior Avengers organization could be called a worker self-directed enterprise, and the UN accord an attempt to override worker self-management with a command-and-control top-down hierarchy (under the guise of the putatively “democratic” UN).

What these films (and Watchmen too) offer, just like similar print comics, is a pretty remedial set of political philosophies.  What each excludes from consideration is any sort of governance system in which ordinary people have equal votes and equal power.  All these films are wedded to the idea that some people are better than others, or at least more suited to rule, and therefore everyone has a “proper” place.  Perhaps there is a belief that such an approach goes hand-in-hand with the genre of superhero films, but it doesn’t have to (*ahem*, Trashman, V for Vendetta, and even the original Incal comics or The Dispossessed).  An interesting counterpoint to the sorts of worldviews in these films is Lars von Trier‘s Dogville.  There, a small town (on a stage set up like the popular Thornton Wilder play Our Town) takes in a woman (Nicole Kidman) on the run from gangsters, and the town votes (the woman excluded from voting) to turn her into a quasi-slave.  The film highlights the deficiencies of the brand of “democracy” employed by the town, with a tyranny of the majority abusing its power and the democratic “vote” doing nothing to prevent the majority’s exploitation.

On top of the structural/procedural political aspects of the DC/Marvel universes, and the usual superhero fantasies of overcoming social problems with the actions of no more than a handful of individual actions, there is also the nagging question of framing the sorts of problems that the superheroes address.  That is, the superheroes in these two films don’t fight poverty, environmental destruction (though occasionally superhero media does address this, usually only in passing), financial exploitation (though occasionally other superheroes do), or other “structural violence”.  Instead of addressing the “banality of evil”, superheroes fight discrete, monstrous villains.  But as often as not, the villains are seen as “evil” merely by stepping out of their “proper” place in globalist social hierarchy — thereby framing the very definition of “evil” in such a way as to exclude a conception of society in a universalist, egalitarian way.

Though it almost pains me to say it, the Snyder/Mnuchin film is considerably better than the Captain America one.  Its politics could be questioned, especially from the sort of Rousseauian perspective (that drives Dogville).  But at least it comes closer to making the politics explicit, and does align itself with some kind of political philosophy (mostly Hobbesist).  And, for that matter, the main characters of the Batman v Superman film behave in a more plausible way, on a strictly interpersonal level.  In spite of the film’s story and character bloat, there are also effective scenes, and the “redemption” of the right-wing vigilante Batman character, who actually comes to realize his mistakes and change his outlook on life (even if still imperfectly), is a rare feat on any level in a mainstream film.