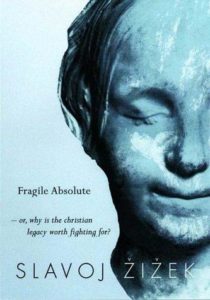 Slavoj Žižek – The Fragile Absolute: Or, Why Is the Christian Legacy Worth Fighting For? (Verso 2000)

Typically Žižek writes long and short books, with the shorter ones restating concepts he had introduced in longer works.  But The Fragile Absolute is a bit different in terms of being shorter but also developing (relatively) new concepts.  His views on christian atheism are significant enough that this book was reprinted years later as part of the publisher’s “Essential Žižek” series.  Yet for as important as the the core christian ideas are to the book, given its title, most of the first half or so scarcely mentions religion at all.  And for that matter, Žižek doesn’t ever mention Thomas J.J. Altizer‘s “death of god” theory, or Ernst Bloch‘s Atheism in Christianity (1968), which seem to set forth a similar frame of discussion.  Instead he starts with Alain Badiou‘s Saint Paul: The Foundations of Universalism (1998).  In short, Žižek’s thesis is that christianity offers a radical position that used “love” as a way toward universality.  Using his typical Lacanian psychoanalytic techniques, and a heavy reliance on Hegelian philosophy, he explores how a sense of duty in the christian concept of love — specifically Pauline agape (love as charity) — can rupture the duality of law and transgression and the pagan notion of life cycles built around a global social hierarchy (of each person and thing in its “proper” place).  In other words, he sees christianity as offering a significant step forward toward an egalitarian society by asserting that each individual has immediate access to (and the right to participate in) universality, without seeing it as “evil” when a person (or strata) no longer is satisfied with a position within an ordered social hierarchy (which inherently has masters who must be obeyed).  Žižek’s key arguments are as profound as ever, yet those could have been distilled to more potent essay or article rather than a book that comes across as rambling in the first half.