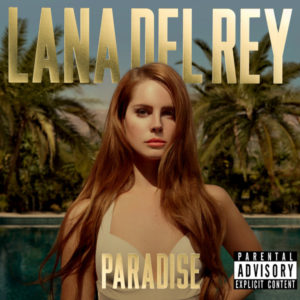 The Paradise EP, released following Del Rey’s breakthrough album Born to Die (and appended as bonus tracks to it on reissues), eschews the trashy dance pop that padded put most of the debut and instead dabbles in romanticized pop with dramatic vocals akin to Jeff Buckley‘s cult classic Grace.  (If that seems like an odd comparison, know that Del Rey has expressed admiration for Buckley and one of the songs here shares the name of his former band).  But Del Rey is also following the Madonna playbook.  Just like Madonna’s second album, Like A Virgin, took the most scandalous elements of her music (as judged by mainstream tastes) and ran with them, Del Rey similarly tries to capitalize on the sensational.  Lyrically, Paradise dwells on the ribald and lascivious.  It is an awkward approach, leaning too hard on shock value.  Throughout, there is a lot of emphasis on traveling and getting away — just the sorts of Americana mythology that has driven so many other musical recordings.  She is clearly trying to make music with some amount of substance.  But she only partly succeeds.  Best tracks: “Gods and Monsters” and “Body Electric.”