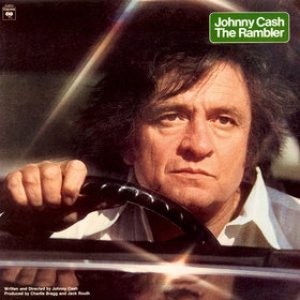 Johnny Cash was a pioneer in making “concept” albums.  These included some with between-song narrations or skits.  The very last one he ever made was 1977’s The Rambler.  In some ways, it’s the most interesting of them all, though it is a little rough around the edges.  The basic premise is that Cash plays The Rambler, a sort of “wise old man” character driving across the country.  Along the way he picks up The Fisherman, who is something of a reluctant hitchhiker (the Rambler has to persuade him to come along), and The Cowgirl, who claims to have killed her “old man” and talks about cheating a pinball machine — which only cost a nickel — to play for over two hours.  The dialogue/skits are woven together with songs that pick up on themes and events mentioned in the skits.  What is different about The Rambler from earlier concept albums like Ride This Train and America: A 200-Year Salute in Story and Song is that this one is explicitly theatrical, with Cash acting out a role, not merely speaking as a narrator.  This is also the only concept album Cash made that had a contemporary focus.  All his other concept albums looked back on historical topics or had nostalgic themes.  It is also worth noting that The Rambler is one of the only albums Cash wrote entirely by himself (From Sea to Shining Sea seems to be the only other he wrote all by himself).

The story carried through the album deals with the possibilities of open-ended road trips, passing scenery, romantic interests back home, people’s use for religion, factory work.  For instance, “Wednesday Car” is in the tradition of songs Cash had recorded earlier in the decade like “Oney” and “One Piece at a Time.”  It’s about an auto factory where the only day of the week that workers were in the right frame of mind to do good work was Wednesday, so you hope you have a car made on a Wednesday.  The Rambler says he has one.  It’s a commentary that was somewhat specific to its time.  Anyone who owned or rode in a big 1970s American-made car knew that quality control was notoriously bad and many cars were “lemons” that didn’t work well even when brand new.   A few decades on some listeners might not appreciate the context for the song, though.

The late 1970s were one of the very worst periods of Johnny Cash’s recording career.  Thanks to his TV show that ended in 1971, he was still riding the tail end of his biggest wave of popularity.  He was in demand as a live performer, and his grueling touring schedule didn’t exactly leave a lot of room to spend time on recording.  As a result, the album occasionally feels rushed, and certain songs and dialogues feel like they would have benefited from maybe a few extra takes.  Also, a few dated production effects hold back some songs.  It’s that way with “No Earthly Good,” which would have been better replaced with the superior acoustic demo version posthumously released on Personal File.

While not Cash’s finest moment by any means, The Rambler is one of his best of the late 70s and certainly the most interesting offering of the era.  It fits somewhere in the continuum of uniquely American travelogues, like Mark Twain’s Adventures of Huckleberry Finn, Woody Guthrie’s Bound for Glory, Jack Keruac’s On the Road, Monte Hellman’s Two-Lane Blacktop, and a host of others.  Cash does okay with his foray into the genre.  Even though the album is theatrical and fictional, the format allows him to really run with a lot of themes that have coursed through his work.  The topics seem meaningful to him and his treatments pretty genuine.  The very idea of traveling around the country aimlessly is pretty radical.  It seems to be premised on the idea that people aren’t entirely independent, and are unable to completely control their own destiny, because of ties to “the system”.  But, maybe, traveling long and far enough, some chance will arise to kind of break free and remake your life.  Though it is worth mentioning that the Rambler character also hints at the “tramp” archetype of an unemployed worker in an industrial economy, wandering aimlessly in search of work.  This was something with some historical relevance at the time the album was released, with “outsourcing” trends beginning and well-paid employment in factories coming under sharply increasing assault.

If you come to The Rambler just looking for tunes, you’ll be disappointed.  To be precise, only about 57% of the album is actually made up of songs, proper.  Frankly, none of these songs are that memorable, individually.  Taken as a whole, though, this album is a nice experience.  There aren’t many albums — if any — quite like it.