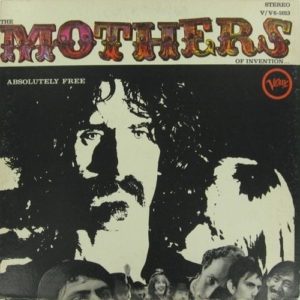 Absolutely Free is sort of the quintessential Mothers of Invention album.  It highlights all the problems with the band’s musical approach.  They were arch cynics, which is to say that their zany fart joke songs give the impression that they are mocking the “system” but that is really just a front for what are ultimately merely attacks on personalities in an — ultimately hypocritical — bid to supplant the personalities being mocked in some kind of upper ranks of that “system” they pretend to mock.  Sound complicated?  Well, it is.  The ultimate problem is the hypocrisy.  Rather than holding up the ridiculous claims of those in power for the moronic and stupid things that they are on their face, The Mothers opt to take a superior attitude, getting mired in a kind of “beautiful soul” problem in which they claim to stand apart from the fantasies of those of dominant society and mock in from afar.  This is the epitome of the criticism that “a cynical distance does not amount to ‘traversing the fantasy’, since it implicitly reduces fantasy to the veil of illusions distorting our access to reality ‘as it really is'[, and so] . . . the cynical subject is [that] who is least delivered from the hold of fantasy.”  But against the odds, The Mothers accidentally addressed this very problem on their next (and best) album, We’re Only In It for the Money, which was unintentionally a self-criticism.