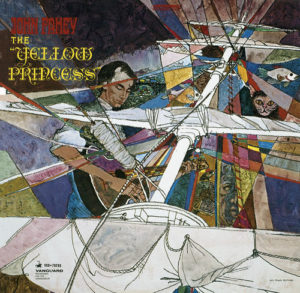 There may not be any simple way to characterize all of John Fahey’s recordings, given the vast amount of territory they cover.  But even as it feels more modern than his earliest records (read: his first three albums), The Yellow Princess still falls toward the more conservative, straightforward end of the spectrum.  That fact leads to a few rather obvious characterizations.  The material is rather accessible, and focuses on technical mastery of the steel-string acoustic guitar in a relatively traditional folk song setting more than on improvised stylistic explorations.  That is to say that unlike his early attempts to play folk and blues tunes like symphonies solo on a steel stringed acoustic guitar, full of noisy artifacts, or experimental sound collages, he is now playing more conventionally pretty and technically impressive folk music.  Prime examples of this are the title track and “Lion”.  Even though he does include some sound collages, there aren’t the inevitable missteps of experimental music that characterize some other Fahey albums, giving The Yellow Princess a more even feel.  A durable and enjoyable album, but also probably not the most impressive in the Fahey catalog — for which I would probably lean toward things like the more enigmatic and mystical Volume 6: Days Have Gone By.  Nonetheless, this is a versatile album well suited for listening in mixed company.

Worth recommending is a CD reissue that adds three lengthy bonus tracks, the best of which is “The John Fahey Sampler, Themes and Variations”.