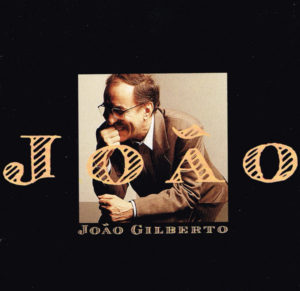 More than thirty years into his recording career, João Gilberto released 1991’s João.  The master sounds as cool and relaxed as ever, but here he is backed by orchestration.  It is somewhat hard to understand why Amoroso (1977), with its treacly, Sinatra-aping, cookie-cutter arrangements, gets praised as one of Gilberto’s best while this stunning, superior effort is somewhat overlooked.  While he often was at his best in minimalist settings, with little else but his voice and acoustic guitar (João Gilberto, Chega de saudade), João might be the consummate realization of his music in a more elaborate and ornate setting.  The orchestration (by Clare Fischer) features strings plus wind instruments, sounding mostly like woodwinds.  The recording is detailed enough that the woodiness of the oboes comes through, and the flutes are smoothed over to eliminate sharp angles.  And the arrangements are superb — voicings move independent of one another and add melodic detail, always perfectly complementary to the overall mood (reminiscent, perhaps, of Richard Carpenter in his prime).  The orchestration is not so much underneath Gilberto’s playing as interspersed and traded back and forth against his singing, sometimes augmenting it with crescendo-ed washes of strings.  This is not a return to a style of his earlier career as much as a new facet that retains a connection to all of his strengths while also standing somewhat distinctly apart form other trends and undercurrents of his past career.

From the beginning, everything about Gilberto’s craft was suited to last into his autumn years.  He is singing here at such a slow tempo, maybe that is a sign of age, but it also encapsulates the reclusive, deliberate, insouciant, persevering, and, above all, incorruptible qualities that make his music so appealing.  This was one of the first of his albums in a very long stretch to feature new songs.  Released decades after the bossa nova fad had passed, this is, surprisingly, yet another Gilberto album that is among the best the entire genre has to offer.  Pure class.  Superb.