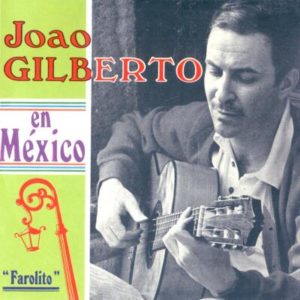 João Gilberto seemed to always take unexpected paths.  Following his rise to international fame into the mid-1960s, he did not release any studio recordings for five years.  He moved to the United States, then to Mexico for a couple years, then back to the United States.  During those few years in Mexico he recorded the sometimes overlooked João Gilberto en México.  The music is transitional, and while there are some simple performances rooted in his past work, with a focus on just Gilberto singing with his guitar, this was an album that notably embraced lush American pop in a new way.  That new turn is epitomized by a version of “Trolley Song,” made famous by Judy Garland‘s rendition for Meet Me in St. Louis (1944).  The album features orchestration, but it seems like that of a minuscule budget, deployed sparingly.  Gilberto would remove all traces of orchestration on his next album, arguably his best.  But orchestration came back even more prominently on the highly successful Amoroso (1977), which has little of the spark and vitality of João Gilberto en México, and the use of an American pop standard even carried over to the artistically rewarding collaborative effort Brasil (1981).  This is an interesting set of music, revealing Gilberto’s willingness to rethink his music in fairly fundamental ways.  Much of the newer (if still retro) ideas he introduced initially here would only come to complete fruition over two decades later on João (1991).