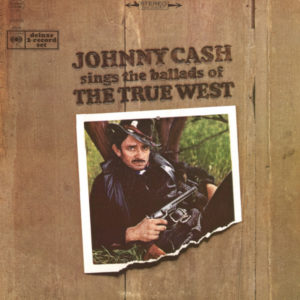 Listening to Johnny Cash’s double-LP concept album Sings the Ballads of the True West, it’s hard not to think of Marty Robbins‘ legendary album Gunfighter Ballads and Trail Songs.  Both are thematically focused on the American “wild west” of the late 19th Century.  Cash made attempts to research the era, and locate suitable material.  But like Robbins, Cash ends up with something more like a Hollywood Western than the genuine article, because he’s often backed with an orchestra or modern vocal chorus.  Which is to say that the authenticity found here, if any, lies in the lyrics and the song selection, not so much in the performance.  Still, he manages to convey something of the times, or at least the great historical myth of the times.  A wonderful banjo helps with that feeling.  If The Man in Black developed something of an outlaw’s image, then the tales of gunfighters and hard times on display here did their part to build it in earnest.  He’s definitely interested in this stuff.  More than most of Cash’s concept albums, this one maintains a focus on the underlying theme quite rigorously.  But like pretty much all of these concept albums, quality of the individual tracks varies, and some probably won’t care for the between-track narrations at all.  This still ranks as a solid second-tier Cash album, with the caveat that the pronounced old-west themes might make this less amenable than others to repeated plays — you kind of have to be in the mood.  An abridged, single-LP version of this album was released as Mean as Hell.