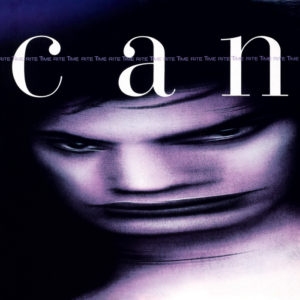 CAN’s reunion album Rite Time — their final studio album — is often derided by fans.  That is somewhat unfair, as this album is decent, even if it isn’t as nearly as good as their very best.  It is actually best compared to their mid-70s output where more conventional commercial rock crept into the music alongside ambient soundscapes.  Original vocalist Malcolm Mooney initiated the reunion and (re)assumes vocal duties.  “On the Beautiful Side of a Romance” opens the album, and it establishes the unmistakable 1980s production values: compressed drums, a synthetic, trebley feel.  There are a couple of jokey novelty songs up next, which incorporate some sound collage elements.  “Like a New Child” is more ambient, but then “Hoolah Hoolah” goes back to novelty music.  “In the Distance Lies the Future” is the album’s highlight, though it was omitted from the original LP (appearing only on the CD version), a song that bassist Holger Czukay said “became one of my favourite CAN pieces of all time.”  I happen to like this album more than most fans, perhaps because the goofy songs don’t put me off and the 80s production values don’t phase me either.