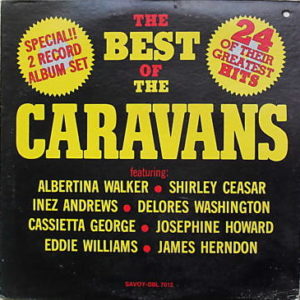 In many ways, Albertina Walker‘s Caravans (a group originally founded by Robert Anderson) were the gospel equivalent of Art Blakey‘s Jazz Messengers in the jazz world.  Both worked like a “grad school”, finding and training a huge number of musicians who would go on to notable solo careers.  The number of star vocalists that came through the ranks of the Caravans is quite astounding.  There was “Tina” Walker of course, but also Cassieta George, Inez Andrews, Bessie Griffin, James Herdon, and the big stars Shirley Caesar and James Cleveland.  There were few gospel groups that managed to cultivate such rosters of great singers for such a long period of time.  The Caravans also heralded the stylistic trends that dominated the sound of contemporary gospel in years to come, with bright solos and slightly muddy backing harmonies.  Their style also lent itself to a kind of Vegas-style showmanship too.  The group was definitely a little weaker than some of their contemporaries in terms of arrangements.  This twenty-three song set is exclusively material recorded for the Savoy label in the late 1950s and the bulk of the 1960s (though the liner notes are skimpy as to recording and release information), and there isn’t a tremendous amount of variety.  At a superficial level, though, this is satisfying stuff.