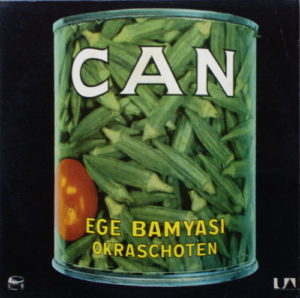 CAN was one of the most important but least recognized bands of the late 20th Century.  Bridging diverse motivations of classical music with rock and roll and more, they were in a large part responsible for what is now called electronic rock.  Their music blended the profound rhythms of James Brown, the abstract composition of Karlheinz Stockhausen (with whom bandmembers Holger Czukay and Irmin Schmidt studied) and Steve Reich, the bold experimentalism of The Velvet Underground and the production effects of The Beatles’ “I Am the Walrus.” The so-called “kraut rock” movement featured a number of highly creative groups but none as innovative and lively as CAN.

Holger Czukay on bass (who also handling engineering) and Jaki Liebezeit on drums formed the core of one of the most acclaimed rhythm sections in rock. “Damo” Suzuki’s vocals were sometimes grave (“Vitamin C”) and sometimes playful (“I’m So Green”), but generally with dadist, anti-artistic sensibilities.  Irmin Schmidt turns in a solid performance, while Michael Karoli’s immediate and evolving guitar work made songs like “One More Night” memorable.  Each band member brought something different to the table, and the group dynamic continuously changed.  Creative interplay inside the group provided the strength to change the world outside it.

The band adds enough comic relief. “Pinch” features a grab bag of whistles and clangs, all used quite humorously within relatively serious settings. Things can get downright goofy, like on “Soup.”  CAN’s destination may often be finely calculated but they meander delightfully along the way.  Even within each song the band makes dramatic shifts from rhythm to melody to noise.

Ege Bamyasi is a focused album that makes a good introduction to CAN’s music.  It actually made the charts in CAN’s native Germany; largely due to use of “Spoon” as the theme to a German gangster T.V. show called Das Messer.  “Vitamin C” also became a theme song for Samuel Fuller’s made-for-TV film Dead Pigeon on Beethoven Street.  Ege Bamyasi doesn’t quite match the albums that came immediately before and after it (from their great “Damo Suzuki trilogy”), but it distills the essence of the band’s peak years.  The beats are funky and atmospheric effects swirl magnificently about to hypnotic effect.  The results are neither as psychedelic as some earlier work nor as ambient or club-pop oriented as later work.  This album is just one step in an extended dance.  The balance is perfect. CAN grasp what seems intangible and hold it to the light.

The superb musicianship and subtle textures of Ege Bamyasi hold limitless possibilities. It highlights CAN’s continued growth.  As intriguing as it is, with an open mind Ege Bamyasi can be rather fun as well.