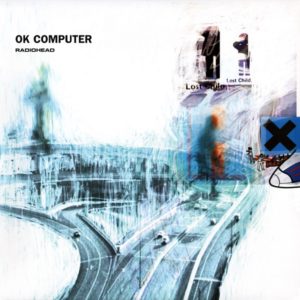 Ah, Radiohead.  OK Computer is an album I would analogize to members of the American Democratic political party.  They both present a basic premise that they never really live up to.  They are supposed to be something on one side of the spectrum, but end up being merely a superficially distinguishable version of the same-old, same-old thing on the completely opposite side of the spectrum.  And just as with the Democrats, its hard to understand why the committed don’t recognize this.  For one thing, this album is just The Bends with lesser songs and noticeable electronic effects draped over the top, in an attempt to sound “current”.  Almost all of the best parts of the album are derived from more interesting sources.  I always get the distinct impression that most British rock of the 1990s, like this and Britpop, was just for people who didn’t get the kind of grunge and alternative rock coming out of America but had no better rock to offer.

Anyway, the appeal of Radiohead seems to rest mostly with Thom Yorke‘s voice, which has a frail quality that evokes a helplessness against the weight of the world.  Karl Marx famously said that “Religion … is the opiate of the masses.”  Another guy said, similarly, “Religion is opium for the people. Religion is a sort of spiritual booze, in which the slaves of capital drown their human image, their demand for a life more or less worthy of man.”  Both meant that religion was a kind of coping mechanism that alleviated symptoms and thereby obviated the need to act to improve material circumstances, that is, to find a cure.  Radiohead fit into much the same framework.  They sell a kind of shared sense of hopelessness as a coping mechanism in lieu of something deeper.  In more concrete terms, they tend to take old music and kind of repeat it, as if there is no possibility of original expression anymore.  Take “Airbag,” which obviously follows the same format as the music of CAN.  And many of the songs, like “Airbag,” start one way then have a changearound part near the end, a gimmick which frequently deploys a lot of electronics, overtures to turntablism, and such.  This gives the impression of a kind of deus ex machina saving grace to the otherwise despairing overtones of the songs.  It is like waiting around for somebody else to swoop in and solve all the world’s problems, and the listener just has to wait for it (and take no affirmative actions in the meantime).  I guess I just fundamentally object to the self-induced hopelessness that this music seeks to foster, and, while I do admire Yorke’s vocal tone most of the time and the production is good when it avoids the electronics, this mostly just can’t hold a candle to the power of its sources of inspiration.  And I can’t help but kind of snicker when people hold this up as intellectual music….  But, frankly, Radiohead has better music out there, for what that is worth.