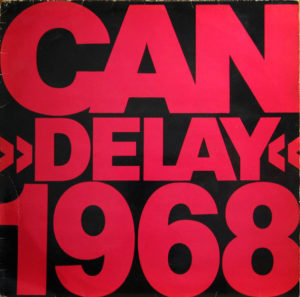 This is a pretty decent set of rejected recordings, originally created for an aborted album tentatively titled Prepared to Meet Thy PNOOM.  Irmin Schmidt (who previously mostly worked as a conductor/composer/recital pianist) founded CAN after a trip to New York City turned him on to R&B/soul and underground rock.  The influence of that trip is evident on these recordings, many of which carry the torch for what The Velvet Underground was up to when Schmidt was introduced to them, along with influences from the likes of The Jimi Hendrix Experience, Sly & The Family Stone and James Brown.  What is immanently clear from these recordings is that this is a group of performers very sensitive to form, even if their performance style is somewhat unpracticed in the rock idiom and favors creating a mood of wild energy over adherence to any specific technique.  But everything about these recordings demonstrates an allegiance to the counterculture of late 1960s urban rock music.  The resultant music is tough, and loosely jammy at times, but also dark and sinister.  It would be wrong to say this is humorless, but it is music that always regards itself as serious and aims for “importance.”

Delay 1968 shows the foundations of what came later for CAN, but it’s also markedly different that what came later.  Drummer Jaki Liebezeit hasn’t yet fully adopted a frenetically mechanical “motorik” style, instead playing in a somewhat more typical rock style, if one still unusually informed by the flexibility and open-ended possibilities of modern jazz.  Guitarist Michael Karoli plays a lot of chugging, modulating riffs and heavy, frequently dissonant chords, with few if any of the long, psychedelic lines that would characterize his playing in the near future.  Irmin Schmidt often approaches his keyboards almost like a player from a warped, blues-based jam band — “Man Named Joe” is sort of halfway between The Velvet Underground and the first Grateful Dead album — without the ominous spaciness that would characterize his playing in the coming years. Though he’s sometimes so far down in the mix that you have to listen hard to pick him out (“Nineteen Century Man”).  And yet bassist Holger Czukay and (especially) vocalist Malcolm Mooney were already performing in much the same way they would in the coming years (though Mooney left the group a year or so later).

“Little Star of Bethlehem” is a narrative rant from Mooney set against a slow groove.  It is much better than, say, “Mary, Mary So Contrary” from the eventual debut album Monster Movie.  The first song, “Butterfly,” has a good beat and crunchy, dissonant melodic and harmonic elements, but it does go on to the point of seeming repetitive without the hypnotic qualities the band achieved on later recordings.  “Thief” was released in an edited form on the compilation album Electric Rock (1971) and is one of the most developed songs in terms of pointing towards what the band would do more of in the future.  “Uphill” is a solid rocker, in roughly the same mold as “Butterfly” but with a quicker tempo and denser guitar strumming.

Delay 1968 is a pretty good album, considering it was originally rejected and sat in the vaults for over a decade before its eventual release.  It is rougher than any of the later studio albums.  And yet, the sense of purpose is undeniable.  Many of the band members were in their 30s when the band was formed, and that is partly what gives this music such a deliberate sound.  These were musicians with ample training and prodigious talents by any conventional measure, and they chose to apply those things towards a rock-centered music that embraced the counterculture.  It is a very punkish approach to music, and that’s precisely why this still sounds as fresh as it does almost a half century later.  If these recordings at times seem somewhat content to merely pay tribute to its influences, the proper debut, Monster Movie, was undoubtedly something new and unprecedented.