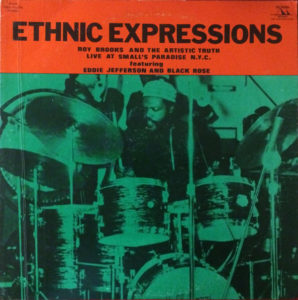 Roy Brooks’ group The Artistic Truth is captured performing live on November 22, 1973 at Small’s Paradise in New York City on Ethnic Expressions.  The music is syncretic jazz.  The players absorb and recreate all manners of styles, from hard bop, to soul jazz, to world fusion.  There is a spiritual, vaguely pan-africanist vibe (leaning “positive” rather than “militant”).  There were a number of groups and record labels pursuing this sort of approach in the early 1970s, and it is a style that has survived in pockets here and there.  What makes this record so special is that the band is great and they no matter how frequently they switch up the style or genre, it is always an organic transition and they play each and every style/genre deftly.  Brooks had a troubled life.  But this album shows no signs of any of that.  The album was once very rare, but is now widely available.