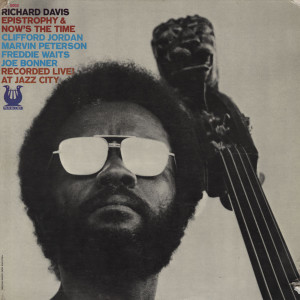 A pretty great live date recorded 7 September 1972 in New York City.  The original LP had one extended song per side, but the 1992 CD reissue adds another superb cut.  The set opens with Monk‘s “Epistrophy”.  Davis on bass plays in a way similar to Miroslav Vitouš, seamlessly drifting between playing lead and comping — though more often he’s on lead here.  Cliff Jordan plays the melody on sax in one of the most awesomely sleazy interpretations I’ve yet heard,  It’s classic Jordan, totally ribald but with a token veneer of politeness.  The performance is strong, but the band is really just warming up.  Charlie Parker‘s “Now’s the Time” is where this set really takes off.  It opens with a wild drum solo from Freddie Waits, who really is on fire throughout this whole album.  Then Davis enters, and right away Clifford Jordan jumps in to state the melody of Parker’s song.  The rest of the group joins in to direct the sound to more of a bop setting.  But before long, the group is off in other directions.  At times, the performance sounds like acoustic fusion.  Later on, it strongly resembles Don Cherry‘s later 1960s world music jazz.  Then Joe Bonner turns everything around and plays something in the style of Cecil Taylor.  Bonner has somewhat of a lesser role through the set, but his contributions are superb, adding perfectly stated accompaniment and occasional flourishes of solo statements.  Davis is playing arco (with a bow) by the end, blending modern classical influences as he was known for, though if you didn’t know it you might think someone had entered on electric guitar.  Toward the end, the melody to Parker’s song is restated, to bring back the bop influences.  Finally, the bonus track “Highest Mountain” ratchets up the energy even more to close the set on a high note.

The sound on the recording is a bit mediocre, and definitely is a product of the 1970s.  The soft, slightly muted dynamics are reminiscent of Rahsaan Roland Kirk‘s Bright Moments from the same era.  But the musicians are really open stylistically and in top form as technicians.  Some of the “songs” they play are almost like afterthoughts.  It seems that these guys were out to play some music and they are really just offering extended quotes from jazz standards more so than truly covering the songs in a conventional fashion, as is especially the case on “Now’s the Time.”  That gives this album a relaxed, welcoming feel.  The spontaneous shifts between widely different styles is something that probably never would have happened in the studio.

Richard Davis’ discography as a leader is somewhat slim, and it includes quite a number of live recordings released on relatively obscure jazz labels.  Now’s the Time might be a standout among those.  I saw The Pyramid Trio (with Roy Campbell, Jr., William Parker and Hamid Drake) in early 2003, and what those guys were doing was pretty similar to what Richard’s band was doing live over 30 years earlier.  In fact, much of what The Pyramid Trio did was exactly the same as what Richard Davis’ group does on Now’s the Time.  Maybe that can be explained by the fact that William Parker studied with Davis at one point.  But it also shows how Davis’ style of performance hasn’t lost any relevance through the years.