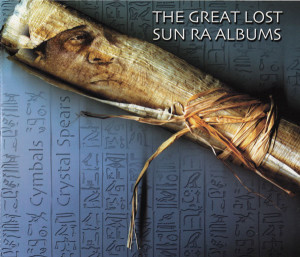 Rescued from the dustbin of history by Evidence, this pairing of albums originally intended for release by Impulse! in the early 1970s (a few tracks from Cymbals were released on Deep Purple) highlights Sun Ra in electric small combo settings.  Cymbals is very a much a continuation of efforts like “The Night of the Purple Moon”.  Yet where The Night of the Purple Moon had Sun Ra up front, Cymbals finds Ra taking a more secondary role while the reed players are at center stage.  Songs like the lengthy “Thoughts Under a Dark Blue Light” are based around extended sax workouts, and built out with plenty of welcoming grooves.  Crystal Spears goes in a different direction though.  The performances are more challenging.  Sun Ra takes on a more prominent role too, with John Gilmore getting a ton of space to himself on “Sunrise in the Western Sky”.  It’s the more intriguing and unique of the two discs, though it may leave a few listeners behind not in tune with the noisier aspects of Sun Ra’s music.

Sun Ra’s synth (mini-moog) blasting out raw sound on “Crystal Spears” is not unlike Miles Davis‘ keyboard in the mid-1970s.  Miles would lean his whole forearm on the keyboard to create massive blocks of sound, as on “Maiysha” from Get Up With It or much of Dark Magus (“Tatu” for example).  This took Davis away from any tonality of course, but it also broke the bonds between melody, harmony and rhythm by presenting sounds that were independent from much of what else went on with the music.  Davis got these ideas from German composer Karlheinz Stockhausen (thanks to house guest Paul Buckmaster), whose compositions like Prozession pointed the way for electronic music organized in elemental terms based on moment-to-moment relationships rather than any kind of overarching guiding structure.  Most call it “noise”.  Noise?  “2 a : sound; especially: one that lacks agreeable musical quality or is noticeably unpleasant b : any sound that is undesired or interferes with one’s hearing of something.” “noise.” Merriam-Webster Online Dictionary, 20 October 2009. But the negative connotations that term carries are purely relative, because it’s only disagreeable or unwanted if you assume from the start that traditional rules about tonality and the implicit guidelines set by standard musical notation define the exclusive boundaries of “agreeable” music.  For the rest of us we can just enjoy the more wide-ranging possibilities that exist outside those assumptions.  That undoubtedly was how Sun Ra looked at it — he was a guy who wouldn’t hesitate to mention that he was from Saturn after all (though it is interesting to note that Stockhausen too believed himself to be of extraterrestrial origin, and also was greatly influenced by swing-era jazz).

In the final judgment, both discs here are highlights from a fertile period when Sun Ra and his faithful cohorts were finding new ways to make their music more accessible while still retaining the essence of the loose, free musics on which they had established their roles as interstellar musical travelers in the preceding decades.