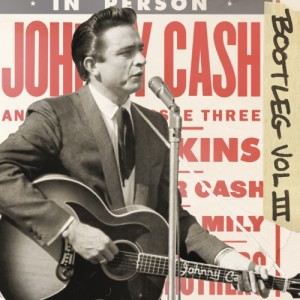 There are a few previously released songs here–an early 1956 performance on the Big “D” Jamboree from The Big “D” Jamboree Live volumes 1 & 2, all of the 1964 Newport Folk Festival performance from Nashville at Newport, and a few selections from På Österåker — but most of this is being released for the first time.  Although the recording conditions aren’t always ideal, the vast majority of this was recorded adequately.  Only a few tracks at the end of the second disc recorded at the Carter Family Fold and the Exit Inn deserve to be considered “bootleg” quality.  It’s probably the case that this is going to appeal mostly to die-hard Cash fans, but for them there are some real treats.  There is a 1969 performance in Vietnam on disc one that is pretty smoking.  It was what inspired Cash to write the song “Singing in Vietnam Talking Blues” that appeared on Man in Black.  He performed despite having pneumonia, and relapsed into taking amphetamines on the tour.  Those recordings absolutely belong in the same conversation as Cash’s legendary 1960s prison concert albums.  There’s a nice one-off solo rendition of “City of New Orleans” (about a train I used to ride!) from a record label event in 1973.  Also of note is the appearance at the White House on April 17, 1970.  There are good performances of “Where You There (When They Crucified My Lord)” and “Daddy Sang Bass” with The Carter Family and Statler Brothers, and Cash substitutes a big, polite “Whoooo!” for the word “motherfucker” in the performance of “A Boy Named Sue.”  This was the show where President Richard Nixon and his staff requested certain songs and Cash famously said no for “Welfare Cadillac” and “Okie from Muskogee”, later explaining that it was because he didn’t have adequate time to learn the new stuff.  That explanation actually makes sense, because if you listen to enough live performances by Cash you probably know that spontaneity wasn’t his strength.  His explanations have differed slightly through the years though.  Parts of shows where he cracks jokes and seems to make mistakes were often actually planned and rehearsed.  He followed a pretty consistent regiment for his concerts and didn’t vary the formula much, though he did get better over time (as Dave Marsh eventually mentions in his liner notes here).  It’s interesting that some of the live performances from the 1970s beat what Cash was releasing on studio albums at the time.  So here’s hoping that there are more live recordings from that era awaiting release — along with something from the early/mid 1980s with Marty Stuart on guitar.