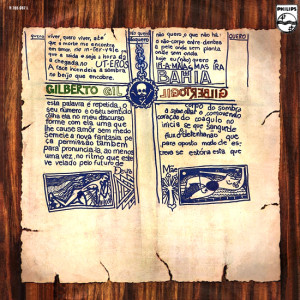 With vocals recorded while Gil was under house arrest by the Brazilian military junta (using a metronome — audible in places), and later orchestrated by Rogério Duprat, Gilberto Gil’s second self-titled album (sometimes referred to by the first song “Cérebro eletrônico” to distinguish it) is more intensely rocking and more overtly filled with electronic effects and musings than its immediate predecessor.  Duprat may have had a freer hand here given Gil’s jailing, which is fine — Duprat was a genius, so who is to complain?  The music also veers more toward private musings and existential concerns.  Eclecticism remains, but the album also somehow manages to feel more cohesive that its predecessor, with sustained emphasis on rock and experimental composition.  This remains one of the best offerings from a very fertile time in the Brazilian music counterculture.