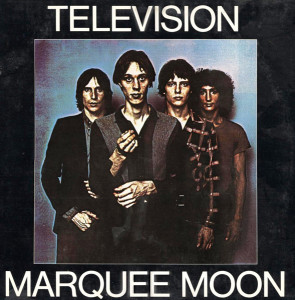 Marquee Moon is Television’s greatest studio album (The album cover is a color photocopy of a Robert Mapplethorpe photo framed in black), and edges out the live The Blow-Up as their best release. Even though more pop-ish versions (like R.E.M.) have grabbed most public attention, Television remains a definitive rock band.

Television helped make raw performance — without regard to traditional rock skill — an asset. The sound is an alternative to the blues. They are never aggressive. Tom Verlaine sings with a decidedly untrained voice, yet helped define a new style. Punk’s do-it-yourself feeling is probably its greatest contribution to twentieth-century music. The natural sound is an urban equivalent of the country-western yodel. These are unique cultural treasures.

Below the surface Television is intellectual and cerebral. The result on Marquee Moon is something new but more accomplished than similar works. The band’s “city” attitude suggests the arrival at a final destination (an interesting side note to punk is how few artists were born or raised in the city, which isn’t obvious given the music’s urban values).

This album captures the turmoil of urban life perfectly. “See No Evil” and “Venus” start the album off right. Every other track is sensational, and minor borrowings (“Guiding Light” takes a riff from John Cale’s “Graham Greene”) are actually stokes of genius. In a world of disillusionment, fragments of life only gain meaning through reassembly. Each moment of Marquee Moon is a glorious attempt to unsettle destiny.

Television has a surprisingly clean sound, never using the distortion of their ancestors or offspring. A bass player will make-or-break a punk band, and replacement bassist Fred Smith handles the job of guiding the band well. Original bassist Richard Hell, who is credited with originating the mussed hair, safety pinned clothing, and visual nihilism of punk, had left the group to form The Heartbreakers (and then The Voidoids) before this album. Guitarist Tom Verlaine had played with Patti Smith but refined his brash style by Marquee Moon. Richard Lloyd burns on guitar as well. While Verlaine was an improviser who didn’t repeat himself, Lloyd could meticulously recreate his riffs, allowing him to overdub and double-track his guitar parts to give Marquee Moon a unique layered guitar sound.  Even with those studio effects, the dual guitars launch into frequent bouts of madness. Crashing guitar rhythms pulse, and shake the band.  Drummer Billy Ficca, especially on the magnificent title track, gives the music a loose, almost jazzy beat.

These guys came along at precisely the right time and place. Malcolm McLaren pleaded to be Television’s manager, but when they declined he headed back to England and adopted the Sex Pistols (who tend to distance themselves from Television out of fear it might ruin their dubious claim as punk’s sole originators). Television released another good studio album, Adventure, before breaking up, only to re-form sporadically. Marquee Moon still sounds great today and will remain a classic indefinitely.