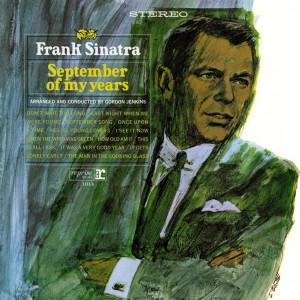 A great one.  What really makes the album are the strings, arranged and conducted by Gordon Jenkins.  They are Sinatra’s burden.  He doesn’t sing with the strings as against them.  Rather than cater to rock music (gaining popularity over traditional pop by this point), here he’s singing lush pop songs fit for a “mature” place in life.  Many songs explore the idea of looking back.  The strings have a rather generic quality.  They are suited to the songs, but not especially tailored to Sinatra’s voice.  So when Sinatra sings, he has to sort of carry the songs over and above those strings, which are like a lifetime of baggage.  And Sinatra is a singer who can absolutely carry these things along with his voice alone.  This is Sinatra at his somber best.