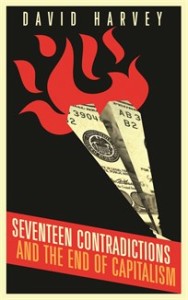 Admittedly, I did not read all of this book.  I did read enough to have my fill though.  David Harvey has achieved that status of academic respect that allows him to release books in which he pontificates about his opinions without regard for much other scholarship, and people nonetheless print those books and read them.  He adopts an air of aristocratic self-importance such that he can discuss other scholars and simply say he does like them.  Support?  Research?  Logical critique?  None of those.  Just the wave of his withered, regal hand — he doesn’t like those other theories.  That is the problem with Harvey.  He’s dispensing his own theories by monologue, not testing them.  The premise of this book is to be an accessible, high level discussion of the inherent contradictions of capital (not capitalism).  Time and again, Harvey reveals his rigid, old-fogey commitment to old theory and his readiness to dismiss all ideas outside his conceptions of orthodox marxism and class reductionism.  Where he’s best is in detailed discussions of the particulars of contemporary urban real estate and associated geography.  But while he has updated the descriptions to fit the modern context, his illustrations add nothing to what has been written a century ago (Absentee Ownership and Business Enterprise in Recent Times: The Case of America).  Pass.