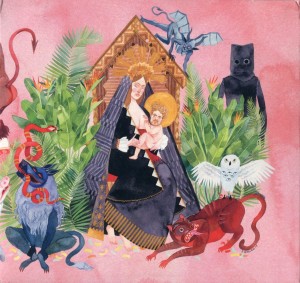 While there are good moments on I Love You, Honeybear, this is music with a definite mean streak and a rather disingenuous, condescending approach to songcraft.  First, the songs.  The lyrics are blunt, delivered without much poetic lyricism, almost like a monologue.  They are deeply cynical, and frequently sarcastic.  Big words and references to current events are littered about, but there isn’t much behind them.  They are used to contextualize the music, place it in front of people who pay attention to such things, but it doesn’t really run with any of those concepts.  It is a rather self-conscious attempt to seem “with it”.  (Also, some of the song titles parody famous old songs).  Much of the time, though, things veer into misanthropic diatribes.  This is were the music becomes arrogant.  The words of the songs constantly put down posers and the falsehoods of mass culture.  But, really, this is just a device to try to place the singer above it.  He constantly takes a superior and derisive tone toward the objects of his scorn (and every song has something to complain about!).  And this is why the music is disingenuous.  It pretends to be above the subjects being trashed, and yet also depends upon them because it needs something to belittle, to assert superiority over.  Occasionally, it works to a point.  The opening lines to “The Night Josh Tillman Came to Our Apartment” are “Oh, I just love the kind of woman who can walk over a man / I mean like a god damn marching band.”  Seems like a feminist anthem, right?  Well, the song soon enough devolves into put downs like “I wonder if she even knows what that word means.”  It returns to the singer explaining how people adore him and how stupidly this other character acts.  This is emblematic of the whole album, which pretends to point out the failings of the world only to seize upon those failings for self-aggrandizement.

Lyrics aside, the instrumental music can be engaging, at times.  Building from a base of contemporary “indie” folk, there are plenty of touches that look back to acid rock and psychedelic folk of the past, mostly of the 1960s and early 1970s.  The record is well-produced, and it has a good command of all the elements of the past called up to service.  Embellished layers and short, shifting resolutions can be catchy, like the driving, distorted electric guitar and pounding piano at the end of “The Ideal Husband” or the smoothly burning guitar soloing on “When You’re Smiling and Astride Me” and “Strange Encounter.”  But the songs that are hardly more than an acoustic guitar and maybe a piano for accompaniment are a drag.  And the singer (Josh Tillman) doesn’t have a particularly memorable tone of voice.  The most interesting parts of this album would have been put to better use elsewhere, with an entirely different lyricist and singer.