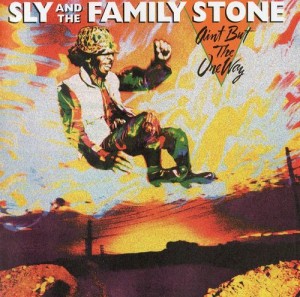 An album that really had more potential than Sly’s previous few efforts, though it still ends up lacking.  Snappier horn charts and backing vocals would have gone a long way.  Side one hints at early Prince.  The side two opener “Who in the Funk Do You Think You Are” features a guitar riff echoed by ZZ Top‘s “Sharp Dressed Man“.  It would have been interesting if Sly had expanded upon the short but intriguing “Sylvester”, the one completely unguarded moment when he musters a revealing sense of dejected nostalgia.  A whole album like that song might have really been a breakthrough.  Instead this is more like Sly’s 70s coke hangover.  Still, I would throw “L.O.V.I.N.U.” and “Sylvester” on a best-of disc and not feel bad about it for a second.